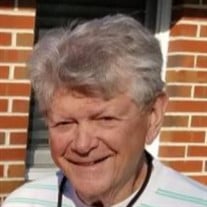 William Henry Wolf, Jr. (88) of Eldersburg, MD, passed away on June 30, 2020 at Carroll Hospice Dove House, after a brief illness, surrounded by his loving family. Born November 23, 1931 in Baltimore, he was the son of William Henry and Eleanora (Kapp) Wolf Sr., and the devoted husband of Janis (Elswick) Wolf for 63 years. Bill was a graduate of the Polytechnic Institute, Class of 1950, where he played baseball. After high school he joined the Army Reserve before enlisting in the U.S. Air Force in 1951, serving during the Korean War. After his service to the country, he attended evening classes at the University of Baltimore for 6 years and was the first in his family to earn a college degree. He was a proud veteran and a patriotic American. Bill was an account representative for 28 years at General Foods/Phillip Morris, and a member of the Masonic Blue Lodge and Boumi Shrine for over 50 years. After retiring early, he enjoyed golf and being a starter/ranger at Willow Springs Country Club. Bill was always engaged in home improvement projects and enjoyed mowing the lawn with his new John Deere riding mower, but most of all he was all about his family. Traveling on family camping trips to Assateague Island and Disney World were among his favorites as he raised his two children in Catonsville. He moved to Eldersburg 24 years ago. Known as Poppy to his five grandchildren and five great-grandchildren, he loved hosting his family at his Ocean City beach house and loved skiing, playing tennis, bowling, and beating everyone at ping pong. He was an avid Bridge player- playing three times a week until the pandemic shut down the senior centers. In addition to his beloved wife Janis, surviving are his children, Susan Krebs and husband Mark of Eldersburg and his son Stephen and wife Anita Veltre Wolf of New London, NH. He adored his 5 grandchildren- Heather Krebs White and husband Sean, Stacey Krebs Frederick and husband Christopher, Brian William Krebs and wife Caitlin, Christina Wolf and Cara Wolf and 5 great-grandchildren Julia, Kyle, Nora, Jack and Nolan. Bill was predeceased by his sister Eleanor Blake and is survived by sister Dorothy Mattheisz. Bill was a stranger to no one and a friend to everyone he met. He will be deeply missed by all who knew and loved him, especially his family. A private service will be held at Haight Funeral Home & Chapel, Sykesville with burial following at Loudon Park Cemetery, Baltimore. A Celebration of Life will be held at a future date due to the COVID-19 pandemic. In lieu of flowers, donations may be made to Carroll Hospice Dove House carrollhospice.org/make-a-gift or the Sykesville/Freedom Fire Department. Online condolences may be offered at www.haightfuneralhome.com

William Henry Wolf, Jr. (88) of Eldersburg, MD, passed away on June 30, 2020 at Carroll Hospice Dove House, after a brief illness, surrounded by his loving family. Born November 23, 1931 in Baltimore, he was the son of William Henry and... View Obituary & Service Information

The family of Mr. William H. "Bill" Wolf Jr. created this Life Tributes page to make it easy to share your memories.

Send flowers to the Wolf family.