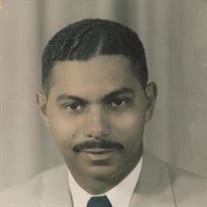 William Augustus Fossett was born to the late Nettie Virginia West and Clarence Marion Fossett on April 4th, 1928 in Sykesville, MD. He was called home to be with his Lord and Saviour Jesus Christ, while holding the hand of his beloved wife, on Thursday, November 11th, 2021. Billy, as his long-time friends and family affectionately called him, was educated in Carroll County public schools, culminating with his attendance at the Robert Moton High School in Westminster, MD. Never one to remain idle, after his graduation in 1946, he worked in various capacities around the Sykesville area until he was drafted to serve in the army during the Korean War. He often recalled fondly that he and some of his childhood friends were inducted together and spoke often of the long journey across the ocean to his station in Germany. Subsequent to his honorable discharge from the service, he enrolled at Maryland State College where he met the love of his life, Helen Berniece James, whom he affectionately referred to as “Dear.” They were married on April 27th, 1957 in Sykesville, MD. Billy worked as a cook at Springfield State Hospital in Sykesville for several years before becoming gainfully employed at Patuxent Institution in Jessup, MD. There he worked for more than 30 years, serving as the Food Administrator for the prison. Additionally, for several area colleges, he ran a program, training inmates in food service with the purpose of making them employable upon their release back into the community. Billy was a man of God and let his faith guide him as a husband and father. The most important thing to Billy was his family. He enjoyed traveling and spent his time taking his family to 48 of the 50 United States and from coast to coast along the southern border of Canada. He loved spending time with his children, attending their school and extracurricular functions, and telling anyone who would listen about their accomplishments as they became adults. He led by example, working multiple jobs simultaneously, while also completing his Bachelor’s degree and providing for his family. His other enjoyment was his involvement with the Former Students and Friends of Robert Moton High, a group honoring former teachers from the school and providing college scholarships for black youth in the Carroll County area. He served as group treasurer for many years and proudly participated in the men’s singing group. Billy was loved by all who knew him. He had an ever, present smile and could always find the silver lining to any cloud. With his passing, he has joined his pre-deceased baby daughter and his brother (Hanson Fossett). He is survived by his wife, Helen, of 64 years, children, Officer Rodriguez W. A. Fossett, Dr. Damirez T. Fossett (Gabby), and Tepanta R. D. Fossett. He is further survived by his two grandchildren, Mia A. Fossett and Micah G. Fossett. Surviving siblings include, sister-in-law, Grace James Corbett, sisters: Ellen Johnson (Billy), Lorraine Foster (Fred), Sadie Olivia Fossett (James), and Valeria Fossett, and brothers: Clarence Fossett (Eddie), and Rodney Fossett (Mary). He also leaves behind a host of nieces, nephews, cousins and friends. The family will receive friends from 1 to 2pm Friday, November 26, 2021 at Haight Funeral Home & Chapel, 6416 Sykesville Road, Sykesville, MD. A funeral service will follow immediately at 2pm at the funeral home. At the request of the family, visitors will be required to wear a mask. Interment will be private. Online condolences may be offered at www.haightfuneralhome.com

William Augustus Fossett was born to the late Nettie Virginia West and Clarence Marion Fossett on April 4th, 1928 in Sykesville, MD. He was called home to be with his Lord and Saviour Jesus Christ, while holding the hand of his beloved wife,... View Obituary & Service Information

The family of William A. Fossett created this Life Tributes page to make it easy to share your memories.

William Augustus Fossett was born to the late Nettie Virginia...

Send flowers to the Fossett family.