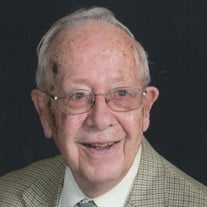 William E. Burr (Bill) died March 30th twelve days shy of his 99th birthday. Bill is survived by his three children and their spouses, Janet & Gill Conley (Sykesville, MD), David & Helen Burr (Corvallis, OR), and Nancy & Dennis Pacholke (Portland, OR). He is also survived by his brother Richard (Dick) Burr (El Cajon, CA), as well as four grandchildren (Marla Conley, Russell Conley, Candace Tutt, Erica Pacholke) and two great-grandsons (Ethen & Eli Tutt). Bill was predeceased by his wife, Marcia Ruth Andrews Burr, in 1973. Born in Battle Creek, Michigan, Bill was raised by his parents Russell & Lamoyne Burr. His love of golf began when he caddied at his father's country club as a teen and developed into a lifelong passion. He also loved to fish; his best friend was anyone who would take him fishing, especially if they also cleaned the day's catch. After serving in the Army during WWII, Bill attended Michigan State University and graduated with a degree in electrical engineering. While attending MSU he met Marcia on a blind date in Batavia, NY, immediately falling in love. Their first child, Janet, was born in Pittsburgh while Bill completed orientation training with Westinghouse. He accepted a position at the facility near what was then Friendship Airport and worked there for the rest of his career. Marcia and Bill settled in Glen Burnie where David and Nancy were born. Both Bill and Marcia were active members in their community, especially at their church, the Glen Burnie United Methodist Church. Bill lived in the house on Glenview Avenue until health issues made it necessary for him to move in with Janet & Gill. A Liturgy of Commendation for Bill Burr will be offered as part of the 11:15 am service of Holy Eucharist on Sunday, April 24th in Union Chapel at St. Andrew's Episcopal Church, Glenwood. Union Chapel is located at the corner of Route 97 and Union Chapel Road in Glenwood, Maryland. Bill's ashes will be interred alongside his wife in Reed Cemetery, Oakfield, NY with a family graveside service at a later date. In lieu of flowers, memorial donations for Bill Burr can be made to either Glen Burnie United Methodist Church, 5 Second Ave, SE, Glen Burnie, MD 21061 or to St. Andrew's Episcopal Church, Glenwood, 2892 Route 97, PO Box 52, Glenwood, MD 21738. Online condolences may be offered at www.haightfuneralhome.com

The family of William E. "Bill" Burr created this Life Tributes page to make it easy to share your memories.

Send flowers to the Burr family.