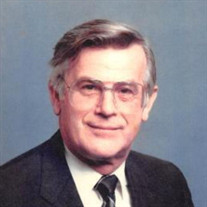 Wayne David Fegely was born on January 16, 1927, in lower Longswamp, Pennsylvania. His parents, Marie and James, raised Wayne and his four siblings (Anna Meck, William Fegely, Ralph Fegely, and Lee Fegely) on a farm in a German-speaking Pennsylvania Dutch community. He attended the Longswamp School, the first rural consolidated school outside of Philadelphia, and he ultimately graduated from Kutztown High School in 1944. Shortly after beginning his collegiate studies, Wayne was drafted into World War II, serving with the Navy from 1945-1947. Following his service and with help from the Veterans Association, he graduated from Lehigh University with a Bachelor of Science in Electrical Engineering (1949) and went on to earn a Masters degree in Electrical Engineering from the University of Pittsburgh (1955), as well as certificates in Advanced Management from Northwestern University (1969) and Mediation from the Baltimore School of Law (1992). Wayne spent 43 years working for Westinghouse (now Northrop Grumman), retiring in 1992 as the Technical Director. During his tenure he made notable contributions to defense technology, including the introduction of Pulse Doppler Fire Control Radar and the Electronically Agile Radar (EAR). An oral history of his career was recorded by the Institute of Electrical and Electronic Engineers, Inc. (IEEE) and his work is highlighted in the National Electronics Museum in Baltimore. Most importantly, he met the love of his life, Phyllis Dries, on a serendipitous blind date in 1950 while visiting his hometown. After convincing Phyllis to move to Baltimore, they married in 1951 and just celebrated 70 years of marriage this past November. Phyllis and Wayne raised their four daughters (Cheryl Eby, Patti Bell, Robin Weisse, and Kim Cornwell) in Ellicott City, Maryland. Throughout his time in Ellicott City, Wayne was an active member of the St. John's Lutheran Church, serving as the President of Council. He was also involved in the Boy Scouts of America, earning the Chesapeake Silver Crab award. In 1974, Wayne and Phyllis purchased an 18th Century farmhouse in Upperco, Maryland, which they named "Petticoat's Advance" after doing some historical digging into the land's history. They spent the last 48 years restoring, remodeling, and evolving "the farm" to be a home for their growing family, including their sons-in-law (Jack Bell, John Weisse, John Cornwell), 10 grandchildren (Colton Eby, Justin Bell, Heather Weisse Walsh, Nicole Bell, Sean Weisse, Hayley Hall, Sarah Featherstone, Sam Cornwell, Jillian Cornwell, Jessie Cornwell), and 6 great-grandchildren (Lila Walsh, Brennan Walsh, Amelia Walsh, Luke Featherstone, Dawson Featherstone, Aurora Hall). Wayne passed away on January 27, 2022, shortly after celebrating his 95th birthday. He is predeceased by his daughters Kim and Cheryl and grandson Colton. He leaves behind a legacy of boundless energy, insatiable curiosity, and a life spent in service to his country, his community, and his family. A memorial service is planned for April 23, 2022, at Petticoat's Advance at 1:00 PM. In lieu of flowers, donations may be made to Lehigh University P. C. Rossin College of Engineering and Applied Science in Wayne's memory. Online condolences may be offered at www.haightfuneralhome.com

The family of Wayne David Fegely created this Life Tributes page to make it easy to share your memories.

Send flowers to the Fegely family.