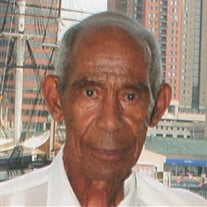 Walter Edward Johnson, Jr., 87, of Sykesville passed away on Sunday, December 2, 2018, at Carroll Hospice's Dove House. Born March 23, 1931, in Baltimore, MD he was the son of the late Walter Edward Johnson, Sr. and Laura Norris Johnson. He was the husband of Edna Young Johnson, his spouse of 59 years. Walter had retired as a head custodian from McDonough School. He served in the U.S. Marine Corps from 1952-60. After his retirement, he spent much of his time volunteering; particularly with Carroll County Food Sunday, Feed My Sheep and with his church. Walter was a life long member of St. Luke United Methodist Church, Sykesville where he served in many roles over the years. He also enjoyed bowling and gardening. Surviving in addition to his wife are daughter and son-in-law, Deidre and Michael Kimbrow of Gwynn Oak and grandchildren: Alexis Kimbrow and Duvant Kimbrow. He was predeceased by siblings, Ernest A. Johnson, Eugene H. Johnson, Beatrice Johnson and Helen Nickens. The family will receive friends on Friday December 7, 2018, from 6 to 8pm at Haight Funeral Home & Chapel, 6416 Sykesville Road, Sykesville where a funeral service will be held on Saturday at 1:30pm. Interment will be in St. Luke Church Cemetery. In lieu of flowers memorial donations may be made to St. Luke UMC, 350 River Road, Sykesville, MD 21784.

The family of Mr. Walter E. Johnson Jr. created this Life Tributes page to make it easy to share your memories.

Walter Edward Johnson, Jr., 87, of Sykesville passed away on...

Send flowers to the Johnson family.