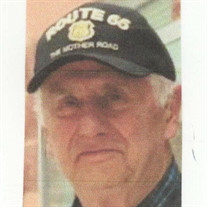 W. Randall Bradford, age 77, of Eldersburg, Maryland, formerly of West Virginia, passed away at home, after a short illness, with his loving family at his side on Tuesday, June 30, 2020. Born October 31, 1942 in West Virginia, he was the son of the late John Bradford and Helen Bradford Duncan(Bacon). In addition to his parents, Randall was preceded in death by his brother, Dean Bradford, sister-in-law, Shelvy Bradford, nephew, Alex Bradford, and brother-in-law, Frank Slack. Randall is survived by his beloved wife of 54 years, Ruth Ann(Slack), his daughters, Teresa Dill, Julie Bulleri(Chris), grandchildren, Aaron Dill, Christie Dill, Gracie Bulleri, Sean Bulleri, brothers, Gene Bradford, John Bradford(Cathy), sister-in-law, Yvonne Slack, and many nieces and nephews. Randall graduated from Stonewall Jackson High School in 1960. After high school he served in the U.S. Army for 3 years. After the Army Randall began working at Verizon where he retired after 30 years of service. In his retirement he worked as a realtor at Century 21 in WV and Long and Foster in Eldersburg, MD. Although he lived much of his life in Maryland he never gave up his love for his beloved West Virginia. He would often make a point of going to visit friends and relatives and of course many of them would meet to watch the Mighty Mountaineer Football team at WVU. Randall is a member of the Nitro(WV) Masonic Lodge, Beni Kedem Shriners(WV), Scottish Rite and a previous member of the Clarksville(MD) Lions Club. He also served on the board at Winifred Manor and was the hall manager for 5 years where he also resided. Randall was a dedicated Christian and took an active part in the churches where he was a member of Mt. Zion United Methodist Church, Highland, MD, Forrest Burdette Memorial United Methodist Church in Hurricane, WV, and Wesley Freedom United Methodist Church in Eldersburg, MD. He ministered through Stephen ministry at Wesley Freedom, participated in Bible studies and also served as a liturgist. Randall was always his happiest when spending time with his family. Ruth and he had many adventures together over their 54 years of marriage and of course creating a loving Christian family is probably their greatest adventure. He also enjoyed traveling both with his extended family and his wife Ruth. One of his favorite recent trips was traveling Route 66 with Ruth and seeing some great American sites. Randall was also known as “Pop” to his most favorite of people, his grandchildren. He taught all of them how to fish, helped with driving lessons, talked politics and just helped them grow into being the most amazing human beings. Randall, Daddy, and Pop, will be missed very much, but we know he is with his Lord and Savior and we are so lucky to have him as an angel watching over us while we continue with his adventure. Visitation at the funeral home will be private. The public is welcome to attend graveside services which will be held on Monday, July 6, 2020 at 12:30 PM at Mt. Zion UMC Cemetery, 12430 Scaggsville Rd., Highland, MD 20777. In lieu of flowers donations may be made to Carroll Hospice, 292 Stoner Ave., Westminster, MD 21157. Online condolences may be offered at www.haightfuneralhome.com

W. Randall Bradford, age 77, of Eldersburg, Maryland, formerly of West Virginia, passed away at home, after a short illness, with his loving family at his side on Tuesday, June 30, 2020. Born October 31, 1942 in West Virginia, he was the son... View Obituary & Service Information

The family of Mr. W. Randall Bradford created this Life Tributes page to make it easy to share your memories.

Send flowers to the Bradford family.