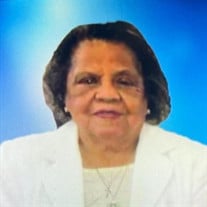 Vivian Adele Beard affectionately known as Babysis, age 88, of Sykesville Maryland, passed away Monday April 26, 2021, at Northwest Hospital. Born August 2, 1932, in Sykesville, Maryland she was the daughter of the late William Harvey Horsey Sr and Mary Catherine (Horsey) Whittaker. Vivian worked in nursing in her earlier years then as a daycare assistant. She retired from Green Manor Turf Farm as a domestic worker. She dedicated her life to the Lord at an early age and proudly served as a lay servant at Johnsville United Methodist Church. She was also the Superintendent of Sunday School for over 25 years. She enjoyed her work in the church, collecting salt and pepper shakers and collecting strawberry items. She loved spending time with her family which she devoted her life to caring for. Vivian graduated from Robert Moten High School in Westminster, Maryland in 1949. She was preceded in death by her first husband Howard Lewis Johnson Sr, her second husband George Albert Beard Sr, and sons Howard Lewis Johnson Jr, Steven Darnell Johnson, and Kevin Laval Johnson and sister Darlene Golphin. She is survived by her siblings: William Horsey II, Catherine Parker, Dorothy Jane Moore, and Barbara Williams (Douglas). Her children: Michael Johnson, David Johnson, Cynthia Johnson-Dockins (Chauncey), Sharon Allen, Timothy Johnson (Sharon) and Darryl Johnson (Shelly). Two daughters in law: Veronica Johnson, Kimberly O’Malley, 19 grandchildren, 14 great grandchildren and a host of nieces, nephews, cousins, and an extended family that she loved dearly. Viewing will be held at Haight Funeral Home and Chapel, 6416 Sykesville Rd Sykesville, Maryland 21784 on Friday, May 7,2021, from 11am-1pm and a private service will follow. Interment at Johnsville United Methodist Church. All COVID-19 protocols will be followed. A livesteam of the service may be viewed at www.haightfuneralhome.com, go to the obituary page for Vivian and click on the video player frame.

The family of Vivian Adele Beard created this Life Tributes page to make it easy to share your memories.

Send flowers to the Beard family.