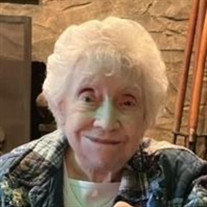 Virginia R. Wolf , age 90, of Westminster, passed away on Friday, January 21, 2022, at Brightview Wellspring Village, Westminster. Born September 25, 1931, in Baltimore, MD, she was the daughter of the late Walter James Ross and Elsie E. Myers Ross. She was the loving wife of the late Roland Stewart Wolf who passed away on July 6, 2021. Virginia had been a homemaker for most of her life in addition she had been a branch manager at the former Sykesville Federal Savings Association. After she and her husband retired, they enjoyed many bus trips across the United States. They would spend the early months of the year in Florida and enjoyed visiting lighthouses on the east coast. She enjoyed spending time with her family, especially their grandson, Geoffrey. Virginia had been a den mother for her son's cub scout troop in the 1960's She is survived by son and daughter-in-law, Stewart and Mary Wolf; daughter and son-in-law, Carol and Tom Henry; and grandson, Geoffrey Wolf. She is also survived by many nieces and nephews. She was predeceased by siblings: James, Robert and Richard Ross, Jane Prince and Betty Updegrove. The family will receive friends from 2 to 3:30pm on Sunday, January 30, 2022, at Haight Funeral Home & Chapel, 6416 Sykesville Road, Sykesville where a funeral service will follow at 3:30pm. Interment will be private. In lieu of flowers, donations may be sent to the Carroll County Special Olympics (socrathletes.org) or to BridgingLife formerly Carroll Hospice. Online condolences may be offered at www.haightfuneralhome.com

The family of Virginia Ross Wolf created this Life Tributes page to make it easy to share your memories.

Send flowers to the Wolf family.