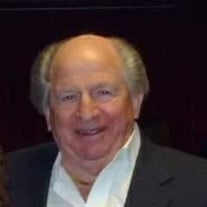 Thomas “Sonny” Edward Shifflett, age 82, of Frederick MD died Wednesday, January 27, 2021 at Frederick Memorial Hospital, with loved ones by his side. Born October 31, 1938 in Harrisonburg, Virginia. He was the son of the late Thomas Pleasant Shifflett and Sarah Margaret Shifflett. Surviving him are his loving daughter Sharon Gibson and son in law Rick of New Windsor. Grandchildren Jordan Chaffman and husband Tim of Mount Airy, Jesse Gibson and wife Melanie of Westminster. Great grandchildren Joel Allen, Caleb James, Luke Thomas, and Nora Ashleigh. Also surviving him is his longtime companion, Linda Studebaker of Frederick. Surviving also are his siblings Marie Cullop of Woodsboro, Benny Shifflett of Hancock, Juanita Shifflett of Frederick, David Shifflett of Thurmont and Harvey Shifflett and wife Katie of Union Bridge and by many nephews and nieces. He was predeceased by his sister Frances Ridgely. Sonny worked at Maryland-National Capital Park and Planning Commission for 42 years until he retired on January 1, 2002. In earlier years, Sonny enjoyed racing at 75 & 80 race track and also street racing. He enjoyed riding his Harley as well as going to cruise-ins with his '53 Chevy. Sonny never met a stranger and was friends with everyone he met. He was well loved and liked by everyone. His grandchildren and great grandchildren were his pride and joy and enjoyed life to its fullest. The family wishes to thank the nurses and doctors at Frederick Memorial Hospital for the great care that was taken of Sonny over the years. Especially to nurse Heather in the ICU unit who stayed by his side through it all. Heather was so caring to his daughter as well. Pallbearers are: Ricky Gibson, Jesse Gibson, Tim Chaffman, David Shifflett, Harvey Shifflett & Marvin Ridgely Jr. Services will be conducted by Pastor Mark Massey of Friendship Baptist Church. Due to the pandemic, the family will have a private visitation and funeral service at Haight Funeral Home & Chapel 6416 Sykesville Road, Sykesville, MD. The family will have a brief graveside service for extended family and friends who wish to attend at 12pm on Wednesday at Lake View Memorial Park, 2724 Liberty Road, Sykesville, MD. The family plans a CELEBRATION OF LIFE SERVICE this summer in memory of Sonny, date to be determined. In lieu of flowers, donations can be made to the Diabetes Association in memory of Sonny.

Thomas &#8220;Sonny&#8221; Edward Shifflett, age 82, of Frederick MD died Wednesday, January 27, 2021 at Frederick Memorial Hospital, with loved ones by his side. Born October 31, 1938 in Harrisonburg, Virginia. He was the son of the late Thomas... View Obituary & Service Information

The family of Mr. Thomas "Sonny" Edward Shifflett created this Life Tributes page to make it easy to share your memories.

Send flowers to the Shifflett family.