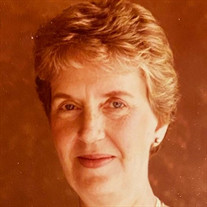 Thelma Koontz Grimes, age 91, passed away peacefully on October 21, 2021. She was born on August 9th, 1930, at her family home on Old Columbia Pike in Ellicott City, Maryland to Leslie and Estelle Koontz. She married her friend and love, Russell Joseph Grimes in 1951, who preceded her in death in 2008. Together they raised five children, Linda, Russell Jr., Bruce, Carolyn, and Steven. Thelma was the youngest of seven children. She loved children and teaching. She was an elementary school teacher for 40 years in Howard County, completing her teaching career at Centennial Lane Elementary. While raising five children and teaching, Thelma earned a bachelor’s degree in 1951 and master’s degree cum laude in 1971 in early childhood education from Towson University. She also earned a bachelor’s degree in 1997 from the University of Maryland in music after her retirement from teaching in 1994. Thelma and Russell bought her parent’s house in Ellicott City, which was the family home place. Thelma was very passionate about her family home, restoring it and hosting the family holiday gatherings every year. Thelma had a great love of music and sang in the Archdiocesan Choir of Baltimore, UMBC Camerata and Chorale, St. Joseph’s Catholic Community in Sykesville, where she was a member, and the Chorale at Fairhaven in Sykesville. Thelma was a skilled pianist and loved her many years in the choirs with which she was associated. Thelma always loved antiques and was passionate about her support for the Treasure Shop at Fairhaven which supported the residents’ Fairhaven Benevolence Fund. . Thelma was an avid reader and usually had stacks of books waiting to be read from the library. Thelma also loved spending time with her children, grandchildren, and great grandchildren. They all have many happy memories of spending time with her at the beach in Ocean City, Maryland where she and Russell had a beach house for many years. She is survived by sons and their spouses Russell J., Jr. and Diana Grimes of New Market, Bruce and Joe Martin-Grimes of Upper Montclair, NJ and Steven and Kathryn Grimes of Clarksville; daughters and their spouses Linda and Richard Little of Bethel Park, PA and Carolyn and Brian Biggins of Adamstown; grandchildren: Kevin, Chris and Michael Little, Tracy Johnson, Russell "R.J." Grimes, III, Sydney, Kendall and Ethan Martin-Grimes and Jake, Ryan and Rebecca Grimes and great-grandchildren: Johanna, Peyton, Aria, Abigail, Isabelle and Luke. Thelma was predeceased by brothers, Courtney, Kenneth, Roger, Russell and Charles Koontz and sister Katherine Neilson. The family will receive friends from 2 to 5pm on Monday, October 25, 2021, at Haight Funeral Home & Chapel, 6416 Sykesville Road, Sykesville. A Catholic funeral liturgy will be held at 11am on Tuesday, October 26, 2021, at St. Joseph Catholic Community, 915 Liberty Road, Eldersburg, MD. Interment will follow in Good Shepherd Cemetery, Ellicott City. Those desiring may make memorial donations to the ACTS Legacy Foundation and in the memo denote "Fairhaven Benevolence Fund", c/o: 7200 Third Avenue, Sykesville, Maryland 21784. Online condolences may be offered at www.haightfuneralhome.com

Thelma Koontz Grimes, age 91, passed away peacefully on October 21, 2021. She was born on August 9th, 1930, at her family home on Old Columbia Pike in Ellicott City, Maryland to Leslie and Estelle Koontz. She married her friend and love,... View Obituary & Service Information

The family of Thelma Koontz Grimes created this Life Tributes page to make it easy to share your memories.

Send flowers to the Grimes family.