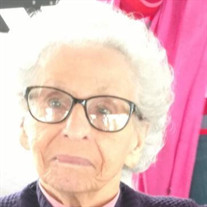 Teresa Maria (Angelone) Pecoraro, formerly of Taylorsville MD, passed away peacefully on Friday, October 1, 2021. She was a resident of Carroll Lutheran Village in Westminster, MD, where she had lived for almost five years. She was predeceased by her husband of 46 years, Louis J. Pecoraro. She was born November 23, 1924, in Isabella, PA, one of nine children of the late Gregorio and Costanza (DeMichele) Angelone, into a large Italian-American family that was very dear to her. She was graduated from Brownsville High School in 1942, and then worked in the company store of the Weirton Coal Company in Isabella. Although most of her adult life was spent as a homemaker, for a time she worked for Home Food Buyers in Sykesville upon moving to Maryland after her marriage, and much later, while her children were in college, she worked in retail at the old Carrolltowne Mall. She was always happiest when in the midst of her extended family and friends, especially when cooking for them. Sharing her cooking and baking was central to her life, and she was very proud to have passed those talents on to her daughter and granddaughters. An avid reader of newspapers and historical novels, she was always deeply interested in politics and current events, as well as anything to do with her Italian heritage. She was predeceased by brothers Guerino, Dominick, Philip, Norio, Annaglad, and Lawrence, and one sister, Rena Durzo. She is survived and was much loved by two sons, L. Gregory Pecoraro of Westminster, MD, and Jamie F. Pecoraro of Canonsburg, PA, and daughter and son-in-law Lisa R. and Scott Ayres of Glen Ellyn, IL, as well as granddaughters Alexandra Pecoraro and Julia Ayres, countless nieces and nephews, great nieces and nephews, and great-grand-nieces and nephews. The family will receive friends from 6-8 pm on Thursday, October 7 at the Haight Funeral Home & Chapel , 6416 Sykesville Road, Sykesville, MD 21784. A funeral mass will be held at 11 am Friday, October 8 at St. John Roman Catholic Church, 43 Monroe Street, Westminster, MD, 21157. Interment will follow at Lake View Memorial Park, in Eldersburg, MD. Online condolences may be offered at www.haightfuneralhome.com

Teresa Maria (Angelone) Pecoraro, formerly of Taylorsville MD, passed away peacefully on Friday, October 1, 2021. She was a resident of Carroll Lutheran Village in Westminster, MD, where she had lived for almost five years. She was predeceased... View Obituary & Service Information

The family of Teresa Maria Pecoraro created this Life Tributes page to make it easy to share your memories.

Send flowers to the Pecoraro family.