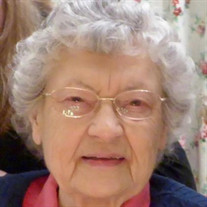 Sue Crisp Hush, 94, currently of Westminster and long time resident of Eldersburg, Maryland, passed away peacefully at Dove House in Westminster, on November 21, 2020. Mrs. Hush was born to the late Lucy Walton Forbes Crisp and James Ashley Crisp in the community of Crisp, in Macclesfield, North Carolina. She was married to her loving husband of 61 years, Martin L. Hush, who passed away January 9, 2010. In her late teens, Sue moved to Sykesville, Maryland to attend nursing school. She successfully became a Licensed Practical Nurse at Springfield Hospital, where she served as a loyal employee until her retirement in 1985. Sue was a lifelong member of Oakland United Methodist Church in Sykesville. She was also a longtime member of Freedom Chapter #87 Order of The Eastern Star. She volunteered countless hours at her church and especially loved devoting her time to the church’s annual bazaar. Over the years, she always enjoyed spending time with her family and many wonderful friends. She especially cherished her role as “Grammy” to her three grandchildren, always keeping up with their schooling, friends, and various hobbies. Sue was also an avid Orioles fan and could often be found listening to baseball games on the radio in the summer. Sue is survived by her son, James Ashley Hush (Virginia), daughter, Susan Hush Harris, and grandchildren, Martin Anthony Harris, Allison Hush Deckard (Coby), and Stefanie Elizabeth Hush. She was very excited about the prospect of welcoming her first great grandchild in January, 2021. She is also survived by sister-in-law Elsie Crisp. Sue was predeceased by her siblings James C. Crisp and his spouse Maxine, Laddie M. Crisp, and Mary C. Dennie and her husband James, all of North Carolina. In consideration of COVID-19 restrictions and our concern for the health and safety of Sue’s family, friends and loved ones, a graveside service for family and friends will be held on Wednesday, November 25, 2020 at 1:00 PM at Lake View Memorial Park, Sykesville, MD 21784. In lieu of flowers, please consider contributing to Oakland United Methodist Church, 5901 Mineral Hill Rd., Sykesville, MD 21784, or to Carroll Hospice Dove House, 292 Stoner Ave., Westminster, MD 21157.

The family of Mrs. Sue Crisp Hush created this Life Tributes page to make it easy to share your memories.

Send flowers to the Hush family.