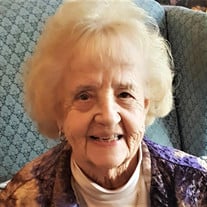 Shirley Lucille Crist Fink Meighan passed away at the age of 95 on April 28, 2020 at the ACTs Fairhaven retirement community in Sykesville, Maryland. Shirley was born in Glenelg, Maryland on June 24, 1924 to Howard and Irene (Sharp) Crist. Shirley lived a long and fulfilling life surrounded by many who loved her. Shirley was a pioneer in women’s education. She attended Towson State Teacher’s College and later earned her Bachelor’s and Master’s Degrees in Education from the University of Maryland. She shaped many lives over the course of her career, which began as a teacher and then principal at West Friendship Elementary School from 1953 to 1976. She then became the first principal for the newly opened Bushy Park Elementary School. She finished her career as the principal of Northfield Elementary School, a Howard County model school where teaching innovations were tried first before being implemented at other schools. In 1986, Northfield was one of the five Maryland elementary schools cited for excellence by the U.S. Department of Education. Shirley was honored as the best elementary principal in the State of Maryland and one of the nation’s top 58 principals by the National Association of Elementary School Principals. She was recognized at ceremonies at the White House for both of those honors. She was involved with music all her life, starting with piano lessons and later with voice and piano instruction at the Peabody Institute. She was a long-time choir director and soprano soloist at Glenelg United Methodist Church as well as an active participant in "The Alleluias" chorale group. She passed on her love of music to her sons and grandchildren. Shirley was an avid swimmer. She loved to travel. She enjoyed reading and working on crossword puzzles. She could never turn down an ice cream cone. She loved to entertain, and her homemade crab cakes, potato salad and coleslaw were the highlight of every cookout! Above all, she was a caring, loving person who encouraged those around her to reach beyond what they thought they were capable of achieving. Shirley is survived by her two sons. Carl Fink (Carol) of Morristown, NJ, two grandchildren, Austine Cezanne Fink of Chicago, IL and Erik Fink of Morristown, NJ, and brother-in-law Harry Gray of Palm Beach Gardens, FL. Shirley has lost many close to her over the years, including loving husbands Fredrick H. Fink (1973) and Walter Meighan (2012), daughter-in-law Austine Rae Fink (2011), her parents, and her five siblings. She will be missed by many. The family asks, in lieu of flowers, that donations be made in Shirley’s name to the Glenelg United Methodist Church Young Scholars Choral Program at 13900 Burntwoods Rd, Glenelg, MD 21737. A celebration of her life will be held at a later date.

Shirley Lucille Crist Fink Meighan passed away at the age of 95 on April 28, 2020 at the ACTs Fairhaven retirement community in Sykesville, Maryland. Shirley was born in Glenelg, Maryland on June 24, 1924 to Howard and Irene (Sharp) Crist. Shirley... View Obituary & Service Information

The family of Mrs. Shirley C. Meighan created this Life Tributes page to make it easy to share your memories.

Shirley Lucille Crist Fink Meighan passed away at the age of...

Send flowers to the Meighan family.