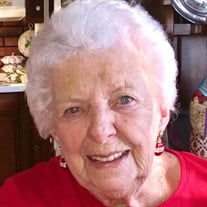 Mrs. Ruth T. Pieper Wilson 1928-2020 Ruth Theresa (Pieper) Wilson, age 92, died peacefully at her home in Eldersburg, MD on Friday, October 16, 2020. Born on July 26, 1928 at The Johns Hopkins Hospital in Baltimore, MD, she was the eldest child of the late Francis August Pieper and Ruth Anna (Blessing) Pieper. Ruthie was raised primarily in the Augsburg Lutheran Home of Maryland, a dual orphanage and senior care facility in Gwynn Oak. It was these formative years at the Home, in the midst of the Great Depression and World War II, that burgeoned her profound resilience, independence, compassion, and appreciation for routine that would drive her even into her final years. After graduating among the top students in her class at Catonsville High School, Ruthie moved out of the Home and began working toward achieving her life’s goal – to have and support a family of her own. Soon thereafter, at Carlin’s Roller Rink, she met her beloved husband, the late Herbert Louis Wilson, Jr., who flouted the disc jockey’s directive that it be ladies’ choice and asked her to skate with him. They were married in 1949 at the Church of our Saviour in Baltimore and raised two beloved children, Bruce and Joy, together until Herb died from cancer in 1982 at the age of 52. Over the years, Ruthie held several secretarial positions at the YMCA, Schuster Concrete, Mount Olive United Methodist Church, and South Carroll High School, and worked as registrar of the Baltimore College of Commerce. She also held a real estate license in the State of Maryland. Affectionately referred to as “Nana” by her grandchildren, their friends, and the Eldersburg community at large, she was known for her unsolicited acts of kindness and for being an ebullient raconteur of her marvelous life. She spent much of her later years baking cheesecakes, fruitcakes, pies, and Christmas cookies with her grandchildren, although her favorite dessert was fresh peach cake from Baltimore’s Fenwick Bakery, which she enjoyed throughout her youth while hopping on and off street cars on The Alameda. Ruthie was also a skilled gardener, with lush rose bushes and flower gardens, and a decorated artist, having won a bevy of blue ribbons at the Maryland State Fair for her intricate counted cross-stitch works. In addition to her parents and husband, she was predeceased by her brothers, Frederick Roland Pieper, Gary Pieper, and Kenneth Cochran; aunt and uncle, Helen and William “Buddy” Blessing; and grandson, James Connor Rousey. Surviving are her children, Bruce Wilson (Sandy Leppo) and Joy Gill (Thomas); siblings, Betty Adams, Carol Jane Greenberg, and John Cochran (Vi); and grandchildren, Patrick Rousey, Justin Rousey, Nicole Wilson, Daniel Gill, Kayleigh Friday (Christian), and Natalie Gill. Due to COVID-19 precautions, private services and interment will be held at Haight Funeral Home & Chapel, Sykesville, and Highland View Cemetery, Berrett. In lieu of flowers, contributions may be made in memory of Ruth Pieper Wilson to the Benevolent Fund of the Village at Augsburg (formerly Augsburg Lutheran Home & Village), 6825 Campfield Road, Baltimore, MD 21207.

The family of Mrs. Ruth T. Pieper Wilson created this Life Tributes page to make it easy to share your memories.

Send flowers to the Wilson family.