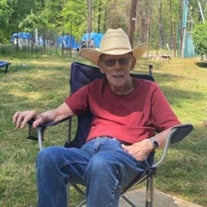 Rudy Joseph Novak, 87, of Elmira New York, beloved husband, father, and grandfather, died Thursday, March 24, 2022, at Carroll Hospital after an extended illness. His son and daughter in law, Steve and Wendy Novak were with him as he took his last breath. Rudy was born January 28, 1935, in Elmira New York. He was a graduate of Thomas A. Edison High School and received his Bachelor’s degree from Elmira College in Math/Physics. He served in the Air Force in Korea for four years and was proud of serving his country. He retired from Westinghouse, which became Northrup Grumman, after 40 years of service. He was a draftsman with Westinghouse and was proud to design shipping containers for radar systems on F-16 aircrafts. His father in-law, Iver Tureson, always asked him if he designed one box then why couldn’t he just use those in the future. Iver always knew how to keep Rudy laughing. Rudy loved to laugh and to make others laugh. He kept his humor even while sick. He always wanted to be helpful, would drop everything if his family needed him. Rudy made friends wherever he went. Rudy loved his family, which included two children and three grandchildren, his cats and bird Loki. He played the accordion for pleasure, professional and for his grandchildren. He played for years in the group called the Florida Keys which constantly had sold out shows. He enjoyed teaching the accordion to a family friend, ensuring his gift will continue. Once he started playing the accordion, nothing could make him stop until the song was done. Rudy was preceded in death his son David Joseph Novak; his parents, Rudolph Novak, and Mary Novak; his beloved sisters, Mary (Mitzi) Novak Berggren and Marjorie Messick; his two brother in-laws, Robert Tureson and Douglas Messick; sister in-law Joyce Novak. He is survived by his loving wife since their marriage on August 8, 1959, Arleen Inez Novak, of Hallock Minnesota, his son, Steve (Wendy) Novak, of Eldersburg, Maryland, brother Robert (Bob) Novak and sister Caroline (Honey) Keetch; grandchildren Madeline Serio, Nathan Serio, and Olivia Novak, of Maryland; sisters-in-law, Sharon Steien, Marlene Tureson, Jean Tureson, and Tammy Tureson. brothers-in-law, Sander Tureson, Terry Tureson, Larry Steien, and Jim Keetch; and several nieces and nephews (too many to count). Family will receive friends on Wednesday, March 30, 2002, from 4pm to 6pm at Haight Funeral Home and Chapel, 6416 Sykesville Road, Sykesville, Maryland 21784. A memorial service will follow at 6pm, with the Pastor Dean Shaw officiating. A celebration of life will be held at a later date in New York and Minnesota. Flowers and online condolences may be offered at www.haightfuneralhome.com. In lieu of flowers, donations may be made in Rudy’s name to the Rape Crisis Intervention Service of Carroll County in Maryland at https://www.rapecrisiscc.org/donate

Rudy Joseph Novak, 87, of Elmira New York, beloved husband, father, and grandfather, died Thursday, March 24, 2022, at Carroll Hospital after an extended illness. His son and daughter in law, Steve and Wendy Novak were with him as he took his... View Obituary & Service Information

The family of Mr Rudy Joseph Novak created this Life Tributes page to make it easy to share your memories.

Send flowers to the Novak family.