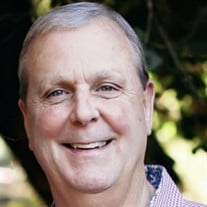 Robert DeForrest Thomas, age 69, affectionately known as “Papa T” by his grandchildren, passed away peacefully on Friday, January 21, 2022 surrounded by his family. Born in Cheverly, Maryland on November 23, 1952, he was the son of the late George and Beverlee Thomas. For the past 45 years, he has been a devoted husband to his beloved wife, Deborah Ann Thomas. Rob lived a life of service, dedicating 31 years as a police officer for both Anne Arundel and Baltimore County Police Departments. Following his retirement, he spent 14 years as the Director of Security for Harbor East Property Management. He was a graduate of Duvall High School, class of 1970, and of the University of Maryland, class of 1974. Rob loved spending time with his grandchildren and family, he was their biggest fan. He enjoyed relaxing at the beach, rooting for his grandsons at their little league games, working on house projects, and caring for his dog, Gustavo. As the patriarch of his family, Rob provided unwavering love and support for those he held dear. In addition to his wife, Rob is survived by his children and their spouses Kasey and Douglas Miller, Kadie and Matthew Derby; mother-in-law Eleanor Vleeschouwer; brothers and sisters-in-law Tommy and Sharon Thomas, Jerry Thomas, Kenneth and Laurie Thomas, and grandchildren Hudson, Wyatt, Jack and Charlotte B. Funeral services and interment will be private. Online condolences may be offered at www.haightfuneralhome.com.

Robert DeForrest Thomas, age 69, affectionately known as &#8220;Papa T&#8221; by his grandchildren, passed away peacefully on Friday, January 21, 2022 surrounded by his family. Born in Cheverly, Maryland on November 23, 1952, he was the son... View Obituary & Service Information

The family of Mr. Robert DeForrest Thomas created this Life Tributes page to make it easy to share your memories.

Send flowers to the Thomas family.