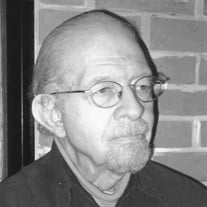 Robert C. Hardy of Westminster, Maryland-known as Bob to family and friends-passed away December 24, 2020, at the age of 84 at Brinton Woods Rehabilitation Center, suffering from COPD and succumbing to complications from Covid-19. Bob was born on December 12, 1936, to esteemed Johns Hopkins speech pathologist Dr. William G. Hardy and spouse Virginia (Newbegin) Hardy. Bob grew up in Baltimore and proudly served with the Submarine Service of the U.S. Navy Reserve. He graduated from University of Baltimore Law School in 1967 and began a career in settling workers’ compensation claims. Before 2006 he was a longtime resident of Landover in Prince Georges County. Bob was a man of many interests, including community theatre; he was often onstage and backstage with MAD Productions at NASA Goddard. Music was an ongoing activity throughout his life, and he sang regularly in church choirs of various denominations, with the Prince George’s Civic Opera, and most recently with the Masterworks Chorale of Carroll County. He played many musical instruments, including the accordion, guitar, Native American flute, folk harp, clarinet, and saxophone. His other interests included reading, photography and building model ships. He was very proud of his Scottish ancestry and he and his wife participated in up to nine festivals per year with Clan Mackintosh. He was a life member of the St. Andrew’s Society of Washington, D.C., and an active member of Graceham Moravian Church near Thurmont, Maryland. Bob leaves behind his loving wife of 60 years, Janet R. Hardy; son William Hardy (Heather) and daughter Nancy Hardy (Jaissa, Chuck); grandchildren Amber (Edward), Michael (Amanda), Lene, Jade, and Kieran; and great-grandchildren Kyleigh, Jordan, Emily, Adrianna, and Thor; as well as sister-in-law Nancy Hoffmann (Pete), brother-in-law George “Mickey” Shumate, and many cherished nieces, nephews, cousins, and friends. He was predeceased by his parents, his son John Paul Hardy, his sister Virginia Shumate, and his brother John Hardy. A private graveside service was held on December 31; a celebration of his life will be held at a later date. Online condolences may be offered at www.haightfuneralhome.com

Robert C. Hardy of Westminster, Maryland-known as Bob to family and friends-passed away December 24, 2020, at the age of 84 at Brinton Woods Rehabilitation Center, suffering from COPD and succumbing to complications from Covid-19. Bob was born... View Obituary & Service Information

The family of Mr. Robert C. Hardy created this Life Tributes page to make it easy to share your memories.

Robert C. Hardy of Westminster, Maryland-known as Bob to family...

Send flowers to the Hardy family.