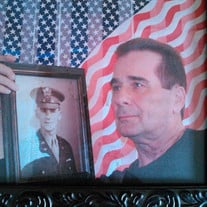 Robert Paul Cappel, age 73 of Westminster, passed away Saturday, June 5, 2021 at Gilchrist Hospice in Columbia. Born August 19, 1947 in Cincinnati, Ohio, he was the son of the late Frank Cappel II and the late Harriet McClarin Cappel. He was the husband of his loving and devoted wife Carol Yowell-Cappel. Surviving in addition to his wife are son Sergeant Major Christopher Cappel who is currently deployed and his wife Amber Cappel of Georgia, daughter Candace Mapes and her husband James Mapes of Ohio, stepdaughters Diane Craft and Kathy Jenkins, both of Maryland, brother Sergeant Major, Army Retired, Frank Cappel III of Ohio, grandchildren Larin Cappel, Grace Cappel, Selena and Noah Cappel, and Elizabeth, Nicholaus and Bella Mapes, step-grandchild Cody Craft and great grandchild Leo Craft and very special mention to nieces and nephews, who loved him and were like his own children Jennifer and Otto Cabrera, Milisa Nicely, Wyatt Jenkins, David Nicely, Denise Nicely, Dakota Jenkins, Daniella Cabrera and many others no less important but greatly appreciated. Our family's vast love for him can not be contained in this writing. He touched the lives of everyone he met. He is with God and God is with us. He gave 15 years of military service to the United States Army and National Guard, serving in the Army's 27th Infantry Wolfhounds division and three tours in Viet Nam. He was awarded the Silver Star for gallantry in action against an enemy of the United States, the Bronze Star for bravery in the face of the enemy in a combat zone, Meritorious Service Award for going above and beyond the call of duty, National Defense Medal, Expert Rifleman, Artillery, Communication and several other awards. He authored the first S.W.A.T. manual for training the military and police departments. After the military he worked as a rehabilitation counselor for individuals with substance abuse for two years. Then he went into the education field as school administrator/president and in the latter part of life worked at K.A.M. Bus Services with developmentally and physically disabled children; work which he loved. In his spare time he was a self-taught amateur blacksmith, fisherman, and he loved mowing the lawn. A visitation will be held on Saturday, June 26, 2021 beginning at 11 am at Haight Funeral Home & Chapel, 6416 Sykesville Rd., Sykesville where a Military service will begin at 12 noon immediately followed by a chapel service until 1pm.

Robert Paul Cappel, age 73 of Westminster, passed away Saturday, June 5, 2021 at Gilchrist Hospice in Columbia. Born August 19, 1947 in Cincinnati, Ohio, he was the son of the late Frank Cappel II and the late Harriet McClarin Cappel. He was... View Obituary & Service Information

The family of Mr. Robert Paul Cappel created this Life Tributes page to make it easy to share your memories.

Send flowers to the Cappel family.