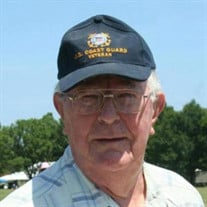 Paul Nusbaum, age 84, passed away on Saturday, July 25, 2020 at his home. Born on August 5, 1935 in Glen Burnie Maryland, he was the youngest son of the late Russell and Elizabeth Nusbaum. He had been married to the late Josephine Nusbaum and had shared nearly 60 years of happiness with her. After his highschool graduation, he served in the U.S. Coast Guard. While on duty in Bermuda, he met his wife, Josephine. After he was honorably discharged from the Coast Guard in 1958, he started working for National Cash Register (NCR) until he retired in the early 1990s. He was a devoted husband, father, grandfather, and great-grandfather as well as a loyal friend. He always took time to lend a hand or a tool to a neighbor or share a cup of coffee with a friend or co-worker. He loved to travel in his camper with his wife. He was a Mr. Fix-it, and he always enjoyed helping others. In his later years after dementia took a firmer grip on him, a good book and a bowl of ice cream were tops on his list. He will be remembered with love by the rest of his family: son Robert “Bob” Nusbaum, daughter Catherine “Cathy” Nusbaum, daughter-in-law Marsha Nusbaum, and son Paul Nusbaum, Jr. He was the proud grandfather of Krista Haifley-Pittinger, and her husband Josh, grandson Brian Haifley and wife Lauren, Josiah Nusbaum, Hannah Nusbaum-Eberly and husband Ian, Bethany Nusbaum, Jonathan Nusbaum, Randy Nusbaum and wife, Lizzy, Tyler Nusbaum, Holly Nusbaum, and Hunter Nusbaum. He was the great-grandfather to Corey Haifley, Madison Pittinger, Kayla Pittinger, Shawn Pittinger, Beth Ann Haifley, and Abigail Eberly, and sister-in-law, Susan McLaughlin, and many beloved nieces and nephews. He was predeceased by his daughter Mary Elizabeth “Beth” Haifley and her husband, Gregory, siblings Jean Pope, Dorothy Pickett, Russell Nusbaum, and Robert Nusbaum, brother-in-laws Leroy Pope, Larry Colfer, and Hugh McLaughlin, and sisters-in-law Janie Nusbaum, Katie Nusbaum, and Rita Colfer. A funeral liturgy will be held at Saint Joseph Catholic Community located at 915 Liberty Road Eldersburg on Thursday, August 6, 2020 at 11:00 am with interment at Lakeview Cemetery following. Social distancing will be practiced during the liturgy; masks must be worn. The funeral liturgy will be streamed on his daughter Cathy’s facebook page, www.facebook.com/cathy.nusbaum.

Paul Nusbaum, age 84, passed away on Saturday, July 25, 2020 at his home. Born on August 5, 1935 in Glen Burnie Maryland, he was the youngest son of the late Russell and Elizabeth Nusbaum. He had been married to the late Josephine Nusbaum and... View Obituary & Service Information

The family of Mr. Paul Wesley Nusbaum Sr. created this Life Tributes page to make it easy to share your memories.

Send flowers to the Nusbaum family.