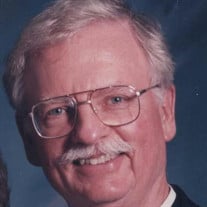 The Life of Paul Selleck Clay Softly came a gentle call for Paul Selleck Clay to peacefully go home to be with our Lord in Heaven late Monday afternoon, November 30, 2020 while surrounded by his family at Frederick Health Hospice in Frederick, Maryland. Paul was born on November 14, 1930 in Newton Lower Falls, Massachusetts to Dr. Charles Lancaster and Helen (nee Selleck) Clay. He was the youngest of four children, including his older sisters Helen, Phyllis, and Priscilla. Paul grew up in Newton in the 1930s, spending a few years in Miami, Florida during World War II, and then in Auburndale, Massachusetts. On March 15, 1951, he joined HQ Co, 26th Infantry Division MNG performing National Guard duty as a co-op student while attending Northeastern University in Boston, Massachusetts where he alternately worked for 15 weeks followed by going to school for 15 weeks. He eventually graduated from Northeastern University on June 27, 1954 with a BS degree in Electrical Engineering. In July 1955, Paul attended Army Basic Training at Fort Dix, New Jersey. After completing his Basic Training in November 1955, he went on Active Duty at Aberdeen Proving Ground (APG), Maryland as a teacher where he taught Anti-Aircraft Fire Control Systems to students of the Ordnance School. By April 1956, Paul was performing National Guard duty at Aberdeen. One momentous Saturday night in May of 1956, Paul attended a dance at the YMCA in Baltimore, Maryland. From across the room, he saw the most beautiful girl he had ever seen, Carolyn Elizabeth Keefer, a girl he loved the moment he gazed into her beautiful blue eyes during their first dance together. This was the start of a truly loving relationship that would lead to their marriage nine months later on February 9, 1957 and continue for the next 63 years. Following his Honorable Discharge from the Army as an SP2 (Specialist Second Class) on July 26, 1957, Paul served for 28 years as a Federal Employee at the Naval Surface Warfare Center White Oak (Maryland) until his retirement on May 2, 1986. Immediately after retiring, Paul launched a second career as a Government Contractor, serving as a Fortran and Assembly Language expert at several companies including SixdB Inc, Lockheed Martin, and then likely NOAA at the National Maritime Intelligence Center in Suitland, Maryland. He retired from his second career by November 30, 2005. Paul had many talents and interests. In his youth, he was fascinated with model airplanes, especially those from World War II. Throughout his life, he enjoyed photography, archeology, traveling, camping, cooking, and baking, especially mince meat pies and bread. Paul, K3BOD, was also an avid amateur radio operator who frequently engaged in two-way personal communications with amateur operators around the world. He was a voracious reader of western novels by Louis L'Amour, and loved western movies and TV shows, the "Get Smart" TV series, the "I Dream of Jeannie" TV series, and James Bond movies, especially those starring Sean Connery. Paul and his family also enjoyed many happy years at their cabin in Deep Creek Lake, Maryland where they loved to go boating, fishing, waterskiing, swimming, nature-watching, bird feeding, and cookouts. Frequent waterskiers included his son, Steve, his granddaughter, Tina, and Paul who waterskied even in his 60s! He was a talented vocalist and self-taught musician, playing country classics and bluegrass on the harmonica, banjo, and guitar, often accompanied by his father, Charles, who played the mandolin. Paul passed this love of music and talent with stringed instruments on to his children and grandchildren. His son Steve and granddaughter Evelyn are accomplished violin and fiddle players. His great-granddaughter, Krystal, is a budding violinist. The late Charles Edward Keefer, Carolyn's father, would be proud to see how hard Paul worked to keep alive the violin talent he established in the family in 1919. Paul loved to play the well-known classic "Foggy Mountain Breakdown" on the banjo, accompanied by his son, Steve, on the guitar. They would then reverse roles, with Steve playing bluegrass hoedowns on his fiddle while Paul accompanied him on the guitar. Paul is survived by his devoted wife of 63 years, Carolyn Elizabeth Clay (nee Keefer), and his sister, Priscilla Hopkins Critser, with whom he enjoyed many holidays and birthday celebrations, especially in recent years. He leaves his devoted children, his daughter Charlene Elizabeth Roelecke and her husband David, and his son Stephen and his wife Antonieta (Toni) from Ecuador. Carrying his memory are his grandchildren Timothy George Shelton, Kimberly Amelia Shelton, Christina Elizabeth Shelton, Evelyn Victoria-Almeida Clay, and a very special great-granddaughter, Krystal Hamilton. Paul is welcomed into Heaven by his parents, Charles and Helen, his sisters Helen Bean and Phyllis Clay, his precious granddaughter, Stephanie Milagros-Almeida Clay, who passed from this life at age 9, loving nephew and chess champion Richard Bean who passed at age 41, and the unforgettable, loving niece, Amy Hopkins who passed at age 46. Additional nieces and nephews assisting in carrying Paul's legacy include Helen Ruth Mullen, George Hopkins, Priscilla Quackenbush, Allyson Hopkins, and Gwynnyth Pappas. We will forever miss Paul for his loving, warm generosity either by serving others or giving money to those who needed it, and never expecting anything in return. We will also miss his kind nature and his ability to simply listen to anyone. He will also be missed by his second family and friends at Jennings Chapel United Methodist Church in Woodbine, Maryland whom Paul has had the pleasure of knowing and worshiping with since 1974. Thank you, God, for the 90 years You gave him to us! In loving memory and tribute to Paul, donations may be made to the American Heart Association (https://www2.heart.org/site/SPageNavigator/donatenow_fru.html). Donations may also be made to rednoseday.org, a campaign to end child poverty.

The Life of Paul Selleck Clay Softly came a gentle call for Paul Selleck Clay to peacefully go home to be with our Lord in Heaven late Monday afternoon, November 30, 2020 while surrounded by his family at Frederick Health Hospice in Frederick,... View Obituary & Service Information

The family of Mr. Paul Selleck Clay created this Life Tributes page to make it easy to share your memories.

The Life of Paul Selleck Clay

Softly came a gentle call for...

Send flowers to the Clay family.