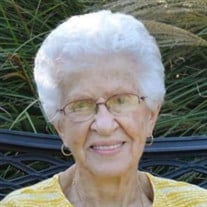 Nancy Virginia Stromberg, age 98 of Sykesville, passed away on Saturday, April 25, 2020 at Carroll Hospice Dove House in Westminster. Born February 28, 1922 in Baltimore, Nunziata was the daughter of the late Frank and Carmella Azzara Spedalere. She was preceded in death by her siblings Nancy, Josephine, Fred, Basil, Sam and by her late husbands- John Gatewood, Howard Gill and James Stromberg. Nancy grew up in Baltimore as a first generation American since her parents were originally from Sicily. As a young girl she helped her mother mend clothes. During the war she and her sister worked at the airplane factory. In 1944, Nancy became a war-time bride only to be widowed less than a year later. In 1946, she married Howard “Jay” Gill and eventually settled in Ellicott City. Nancy was a homemaker and raised their son, John on Chapel Avenue. In 1978, Nancy was widowed for the second time. Later, Nancy married James Stromberg. She enjoyed traveling with “J.P.” until his death. Nancy resided in Ellicott City for 40 years where she was a member of the Resurrection Church. She worked as a secretary at Montgomery Wards and Benjamin Berman Carpets. She volunteered at St. Agnes Hospital for many years. She had an excellent memory for faces and would remember some of the nursing students nearly 20 years later. In 1998, Nancy moved to Carroll County and became a member of the Saint Joseph Catholic Community Church in Eldersburg. She volunteered here as well. She continued to be active and frequented the Senior Center where she was an avid bingo player. She enjoyed her great-grandchildren. She was very independent and continued to be so for all but the last two years of life. We would like to thank the family, friends, the Visiting Angels and Carroll County hospice for helping us to take care of Nancy at home. Surviving are her son John Gill and his wife Kathy Gill of Sykesville, granddaughter Lindsey Gill Carter and her husband Tobe Carter, and great grandsons Pierson, Quin, Macoy and Revere. A funeral service will be held on July 16th at 11:00 at Saint Joseph Catholic Community Church in Eldersburg followed by a private interment. In lieu of flowers, please send donations to St. Joseph Catholic Community, 915 Liberty Rd., Eldesrburg, MD 21784 or to Carroll Hospice, 292 Stoner Ave., Westminster, MD 21157. Online condolences may be offered at www.haightfuneralhome.com

The family of Mrs. Nancy Virginia Stromberg created this Life Tributes page to make it easy to share your memories.

Nancy Virginia Stromberg, age 98 of Sykesville, passed away on...

Send flowers to the Stromberg family.