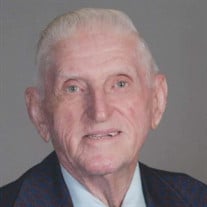 August 7, 1926 - July 15, 2021 Melvin Thornton Hush, age 94, died peacefully at BridgingLife Dove House in Westminster after a short hospital stay. He was the son of Arthur Howard Hush and Mary Virginia Hush. He was the husband of Rose (Pickett) Hush for 69 years. Rose predeceased him in August of 2018. He was known as Thornton during his childhood years at his family’s farm which was located on Oakland Mills Road where the Liberty Boat Dock is today. The farm was acquired by Baltimore City to create Liberty Reservoir in 1944. He and his brothers all built homes within 5 miles of the old farm. Thornton’s first job was with Rustless Iron and Steel in Baltimore at age 16 for 90 cents an hour. He joined the Navy on October 4, 1944 and served in the Pacific theatre during World War II. He served on a destroyer escort. It was after serving in the Navy where he used his first name, that many friends began to call him Melvin. He was OK with either name! The Navy sent him home with a carpentry kit and he did odd jobs as a carpenter until he was hired by Springfield State Hospital and worked his way to a Maintenance Supervisor position during his 25-year career there. Rose and Thornton lived in a one-room employee’s home at Springfield for 6 years until they built their own house on Oakland Mills Road which was completed in 1954. Though his primary residence remained the same for 67 years, Thornton and Rose traveled throughout the United States and also visited Australia and Germany where their daughter and son-in-law had been working for the U.S. Government. They owned a lot and trailer on the Potomac River in Williamsport, MD. and spent many weekends there swimming, water-skiing and making friends. After retiring at age 51 from Springfield, he worked for Little George’s grocery stores as a maintenance handyman for another 11 years. During that time, his motto was “never on Fridays”, because he had negotiated a 4-day work week allowing him to hunt or garden on Fridays. Thornton was a member of Oakland United Methodist Church for over 80 years, where he served on the cemetery committee, and helped with dozens of church clean-up days. He was the recipient of God’s love from that special community of believers. He also served on the Board of Directors for the former Carroll Community Bank for many years. An optimist and extrovert, Thornton loved life, being with people and being outdoors. He loved to garden and sold produce from his front lawn for many years. In his later years, he loved to deliver tomatoes to his family and friends. He enjoyed dancing to country music and listening to bluegrass. He was a member of the Westminster Moose and danced most Friday nights up until 2021. He is survived by his daughter, Gloria Jean (Hush) Serrao and son-in-law Gary Serrao, of Gettysburg, PA and his grandsons, Geoffrey Serrao of Hanover Md. and Gordon Serrao of Baltimore, Md. He was predeceased by his siblings: Elizabeth (Hush) Meadows (Sis), Arthur William Hush (Bill), Emory Donald Hush (Don), Herbert Howard Hush (Herb), Anna Virginia (Hush) Reisburg (Ginny). Family and friends are invited to visit on Monday, July 19th from 2:00 - 4:00 p.m. and 6:00 to 8:00 p.m. at Haight Funeral Home and Chapel, 6416 Sykesville Road, Sykesville where a funeral service will be held on Tuesday, 10 a.m. Interment will be in Old Oakland Cemetery. In lieu of flowers, contributions can be made to Oakland United Methodist Church.

August 7, 1926 - July 15, 2021 Melvin Thornton Hush, age 94, died peacefully at BridgingLife Dove House in Westminster after a short hospital stay. He was the son of Arthur Howard Hush and Mary Virginia Hush. He was the husband of Rose (Pickett)... View Obituary & Service Information

The family of Mr. Melvin Thornton Hush created this Life Tributes page to make it easy to share your memories.

Send flowers to the Hush family.