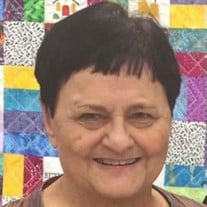 Mary Etta Landis, 82, a long-time resident of Ellicott City, passed away on Thursday, January 20, 2022, after battling cancer for the past six months. She is survived by her husband of 63 years, David, her daughter Robyn Thomas and son-in-law John, and her son Dean and daughter-in-law Jenny. She is also survived by four grandchildren: Zachary Landis, Laura (Thomas) Yeager and husband Adam, Abigail Landis, and John Thomas IV. She also leaves behind two brothers: Malcolm Cain of South Bend, Indiana, and Ronald Cain of Athens, Georgia. Mary Etta was born in Jeffersonville, Indiana in 1939 and attended Ball State University for 1 year before marrying David when she was 18 years old. They moved to Coral Gables, Florida in 1958, where David played basketball for the University of Miami. After moving to Maryland in 1966, she raised Robyn and Dean while pursuing her college degree, graduating from Towson University with a B.S. in Mathematics. Mary Etta worked as a computer programmer for USF&G before retiring in 1990 and devoting herself to her family and quilting, sewing, and other crafts. She was an active member of Bethany United Methodist Church in Ellicott City for nearly 50 years, creating banners, ornaments, and other pieces of art for the church. She was a member of the Bethany Bell Choir and Card Ministries for many years and served in various lay leadership positions. Mary Etta and David moved to Carroll Lutheran Village in 2018. Mary Etta was active in sewing and crafting groups at CLV and made masks for residents during the early stages of the COVID-19 pandemic. A Memorial Service and Celebration of Life will be held at Bethany United Methodist Church on Saturday, February 5 at 2:00 p.m. In lieu of flowers, donations may be made to Mary Etta’s favorite charities: Doctors Without Borders (doctorswithoutborders.org) and UMCOR (umcmission.org).

Mary Etta Landis, 82, a long-time resident of Ellicott City, passed away on Thursday, January 20, 2022, after battling cancer for the past six months. She is survived by her husband of 63 years, David, her daughter Robyn Thomas and son-in-law... View Obituary & Service Information

The family of Mary Etta Landis created this Life Tributes page to make it easy to share your memories.

Send flowers to the Landis family.