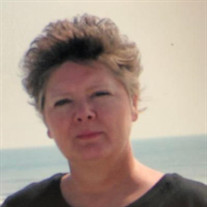 Mary Patricia “Patti” Klausing passed away peacefully at her home on Saturday, June 19, 2021. At 65 years old, her family and friends remember her as “youthful and vibrant.” “Her presence filled the room, effortlessly creating a safe and warm atmosphere,” recalled her granddaughter, Kaylie Klausing. “She always wanted to go out and do something we’d never done before.” Born to Aileen “Spanky” Rykiel and the late Charles Hiltz in 1956, Patti grew up in Boca Raton, Fla., with her siblings Joseph and Jacqueline Hiltz. The family later moved to Maryland with her stepbrothers Gary and Scott Rykiel, children of her late stepfather, Melvin Rykiel. As a single mother, Patti worked hard to raise her son, Jason Klausing. “It was hard for her, but she did it without any help,” said her mother. When Jason had his first daughter, Kaylie, Patti was very involved. Patti was eager to help her son and Kaylie’s mother, Amanda Harris. Jason later married his wife, Jen, with whom he had two more children, Harper and Julia Klausing. “Her passion was being a grandmother,” said Spanky. Patti’s creativity manifested itself in many forms through knitting, her art, and her style. Patti’s time was spent reading and learning more about her interests, always eager to continue educating herself. “She never stopped learning,” said her mother, Spanky. During her career as an occupational therapist, Patti started out at Johns Hopkins, later working at Lorien in Mays Chapel. Her compassion and charisma made a lasting impression on her patients. Patti’s natural talent for occupational therapy and love of horses later led her to Maryland Therapeutic Riding Center. Patti worked there for several years as a hippotherapist, using horses as a form of therapy for her patients. Patti was recently certified as a pediatric sleep consultant and doula, with her own company in the works. Patti’s new career in pediatric care received local support as soon as she began, already receiving recognition from GBMC and local doulas. The family will receive friends on Sunday, June 27, 2021 from 2-4pm and 6-8pm at Haight Funeral Home & Chapel, 6416 Sykesville Rd., Sykesville. Funeral services will be held on Monday June 28, 2021 at 11:00 AM at the funeral home. Interment will follow at Springfield Cemetery, Sykesville.

The family of Mary Patricia "Patti" Klausing created this Life Tributes page to make it easy to share your memories.

Mary Patricia “Patti” Klausing passed away peacefully at her...

Send flowers to the Klausing family.