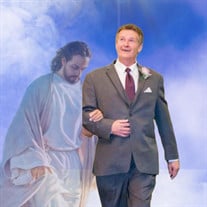 Mark Johnathan Cornwell, 58, of Westminster, Maryland celebrated his victory on January 2nd 2022, when he took the Lord's hand that led him home and set him free of all his pain and sorrow. Mark was born on November 15, 1963, to Emory and Eulav Cornwell in Howard County, Maryland where he grew up. He graduated from Glenelg high school in 1981. He proudly learned the trade of plumbing by working side by side with his dad and brothers in the family business from the time he was a little boy. His working career ended in 2003 when he experienced a tragic accident which left him with years of pain and infirmities. Mark became a father in august of 1983 when his first daughter Crystalle was born. He later went on to meet his wife Carolyn. After two years of dating, they got married in 1987 and would then welcome their daughter Kristen, 3 years later. God had blessed him with the gift if singing and playing the guitar which he most cherished doing with his family. He had a deep love for his dogs and horses, Elvis and football. He had a tender heart that knew no bounds and would have done anything for anyone. Mark is survived by his dedicated wife of 34 years, Carolyn Reda Cornwell. His daughters that were the apple of his eye, Kristen Case and Crystalle Rivers; son-in-law, Shane Case whom he thought the world of; His granddaughter that had him wrapped around her finger, Olivia Case and grandson Dillon Johnson. He is also survived by his mother, Eulav Cornwell Mitchell; brother, Tom Cornwell and sister-in-law, Susan Gay Cornwell. mother-in-law Marion Reda brothers-in-law and their spouses, Mario and Karen Reda, Fran and Debbie Reda, and Bobby and Janette Reda. Mark also leaves behind many cherished nieces and nephews, Mindy Guy, Jessica Saia, Jeremy & Jonathan Cornwell, Robert Reda, Jessica Sebastian, Lindsay Swain, Ashley Reda, Mario & Michael Reda and all their spouses and children. There were many loved ones that were called home before him that he longed to see again which included his grandson Brian, his father Emory, his brother Danny, his grandparents, many aunts and uncles, his father-in-law Mario, dear friends James and Tommy and many more. Including his beloved pets. Mark accepted Jesus Christ as his Lord and Savior at 7 years old and knew that one day he would be received into the arms of God and set free from all his worldly struggles and made whole again. Though he will be deeply missed, his family rejoices in his victory and has the promise of knowing that we will see him again! A celebration of life will be determined at a later date. Free At Last! Online condolences may be offered at www.haightfuneralhome.com

Mark Johnathan Cornwell, 58, of Westminster, Maryland celebrated his victory on January 2nd 2022, when he took the Lord's hand that led him home and set him free of all his pain and sorrow. Mark was born on November 15, 1963, to Emory... View Obituary & Service Information

The family of Mark J. Cornwell created this Life Tributes page to make it easy to share your memories.

Send flowers to the Cornwell family.