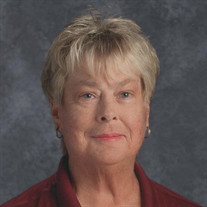 Margaret Ann Garrett, age 69, of Winfield, passed away on Sunday, February 6, 2022, at Bridginglife's Dove House. Born July 20, 1952, in Sykesville, MD she was the daughter of the late Marvin Bosley Alexander and Margaret Virginia Walsh Alexander. She was the loving wife of Ronald Bruce " Ron" Garrett, Sr. Margaret grew up in Sykesville. She retired from Carroll County Public Schools where she had worked as kitchen staff at Century High School. She enjoyed camping, the beach and especially spending time with her family. Surviving in addition to her husband are son and daughter-in-law Ronald Bruce, Jr. and Dawn Garrett of Keedysville, MD; daughter and son-in-law Melissa Ann and Allen Billingslea of York, PA; brother and sister-in-law Richard and Pam Alexander of Sykesville and sisters and brother-in-law Mary Ruth and Alan Potts of Hanover, PA and Jean L. Alexander of Westminster; grandchildren: Amanda, Ronald B., III, Troy and Allissa and great-grandchildren: Skylar and Mia. She is also survived by many nieces and nephews. The family will receive friends from 2 to 4 & 6 to 8pm on Wednesday, February 9, 2022, at Haight Funeral Home & Chapel, 6416 Sykesville Road, Sykesville where a Catholic prayer service will be held on Thursday at 10am. Interment to follow in Old Holy Family Cemetery, Randallstown. Online condolences may be offered at www.haightfuneralhome.com

The family of Margaret Ann Garrett created this Life Tributes page to make it easy to share your memories.

Margaret Ann Garrett, age 69, of Winfield, passed away on Sunday,...

Send flowers to the Garrett family.