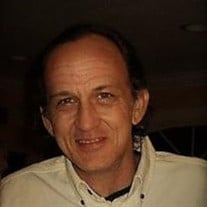 Marc Evans "Lango" Langanes, aged 57, of Columbia, Maryland, passed away early Monday morning, March 7, 2022. Born August 12, 1964, in Hackensack, New Jersey, he was the son of the late Hugh McCracken and Gloria "Bonnie" Almeida. Marc had been a cook, mechanic, KinderTwin, and a musician for many years. He followed in his father's footsteps with his love of music. He was a loyal Deadhead and followed the band on tour throughout the United States, but it was a trip to Jamaica for Reggae SunSplash that sparked a passion for reggae music, later joining Unity Reggae Band as their bass player. In his younger years, Marc enjoyed camping, hiking, and anything and everything Volkswagen. His passion later became cigars, becoming a cigar rolling aficionado. But most important to him was spending time with his family and friends. Marc's life philosophy can be best described as sung by the late Bob Marley: "…don't worry about a thing, 'cause every little thing gonna be alright He is survived by his sisters: Kimberly Hope and her husband Frank, Stacey Almeida-Douglas and Jodi Capitanelli, his brother, Scot McCracken, and his nieces and nephews: Spencer Hope, Christopher Hope, Aoife Douglas, Victoria Duane and John Capitanelli, as well as his long-time caregiver and friend: Melanie Adams. A celebration of his life will be held at a later date. Those who desire may make memorial donations to the University of Maryland Hospital Foundation, 110 South Paca Street, 9th Floor, Baltimore, MD 21201. Online condolences may be offered at www.haightfuneralhome.com

The family of Marc "Lango" Langanes created this Life Tributes page to make it easy to share your memories.

Send flowers to the Langanes family.