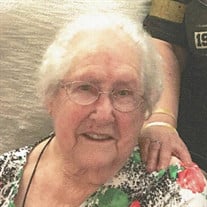 Louise Elizabeth Hinkle, age 96, of Sykesville, passed away on Monday, November 2, 2020, at Brinton Woods Nursing and Rehabilitation Center. Born January 9, 1924, in West Friendship, MD she was the daughter of the late Harry B. Akers and Alice Irene Neibert Akers. She was the wife of the late Leo P. Hinkle who died in 1997. Louise retired from Westminster Nursing Home where she had worked in the dietary department. She enjoyed going to the Westminster Senior Center when she was able. Some of her interest included watching old tv shows, traveling putting puzzles together, working with word searches and especially playing bingo. She is survived by children: Alvin Hinkle, Steve Hinkle and wife Jackie, Patricia Graham and husband Jeff and Carol Fasano; daughter-in-law Ginny Brown and fiance Phil Schrider and grandchildren: Donna Johnson, Debbie Kreider, Delores Eger, Christina Carlyle Jeffrey Graham, Ryan Hinkle, Steven Hinkle Ashley Brace, Aaron HInkle, Nicole Logan, Brittany Pemberton, Heather Compton, Robert Fasano, and Sherry Sweeney Hanes. She is also survived by 20 great-grandchildren and 6 great-great-grandchildren. She was predeceased by her son Richard "Dick" Brown, grandson Robert Hinkle and great-granddaughter Tiffany Eger. Due to current pandemic restrictions, visitation and funeral services at Haight Funeral Home & Chapel, Sykesville will be private. A public graveside service will be held on Saturday at 1:30pm at Lake View Memorial Park, Sykesville. The family would like to give a huge thank you to Carroll Hospice nurses and the staff at Brinton Woods for their love and support during her stay there. In lieu of flowers, memorial donations may be made to Carroll Hospice, 292 Stoner Avenue, Westminster, MD 21157. Online condolences may be offered at www.haightfuneralhome.com

Louise Elizabeth Hinkle, age 96, of Sykesville, passed away on Monday, November 2, 2020, at Brinton Woods Nursing and Rehabilitation Center. Born January 9, 1924, in West Friendship, MD she was the daughter of the late Harry B. Akers... View Obituary & Service Information

The family of Mrs. Louise E. Hinkle created this Life Tributes page to make it easy to share your memories.

Louise Elizabeth Hinkle, age 96, of Sykesville, passed away on...

Send flowers to the Hinkle family.