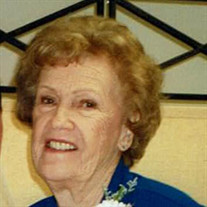 Lillian Augusta Sandosky Putman, 98, of Westminster, died peacefully on Tuesday, November 10, 2020, at Inspirations of Westminster. Born January 21, 1922, in Marriottsville, she was daughter of the late Louis Sandosky and Lillian Weetenkamp Sandosky. She was the wife of the late Richard S. Putman who passed away in 2005. They had been married for 59 years. She was known as Gussie throughout her life and was graduate of Sykesville High School, class of 1938. She played basketball and volleyball in high school and was an avid Orioles fan. Gussie worked as a secretary for Sandosky Contractors. After retiring she took up a love for oil painting. She was a longtime member of St. John Roman Catholic Church in Westminster. She enjoyed living on the family Christmas tree farm and the loving care she received at Inspirations. She is survived by daughters and sons-in-law Peggy and Mike Luers of Westminster and Jo and Martin Fosse of Sun City Center, FL; grandchildren Brent Luers and wife Diane, Tiffany Cox and husband David and Renee Mohr and husband Joshua; seven great-grand-children Megan, Christopher, Shane, Wyatt, Garrett, Faith and Amara; one great-great-grandchild Graden. She is also survived by sister-in-laws, Katie Sandosky Springer, Evelyn Putman, and Faye Sandosky. She was predeceased by brothers Harry Sandosky, Sr. and Robert Sandosky and sister Mary Joanne Sandosky. A graveside service will be held on Saturday, November 14, 2020 at 12:15pm at Springfield Cemetery, 7300 Spout Hill Road, Sykesville. In lieu of flowers, memorial donations may be to Carroll Hospice, 292 Stoner Avenue, Westminster, MD 21157. Online condolences may be offered at www.haightfuneralhome.com

The family of Mrs. Lillian A. "Gussie" Putman created this Life Tributes page to make it easy to share your memories.

Send flowers to the Putman family.