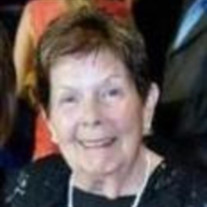 Leona Hoyas, age 86, of Sykesville, passed peacefully on Thursday, February 25, 2021, at home, surrounded by her family. Born March 2, 1934, in Vintondale, PA she was the daughter of the late James Samitore and Grace Brown Samitore. She was the loving wife of the late John Hoyas who died in January 5, 2007. Leona, also known as "Lee" had been a legal secretary for many years with the late Lloyd Hammond of the former law firm of Hammond and Hammond in Reisterstown. She was a longtime member of St. Joseph Catholic Community, Eldersburg where she had been active as a greeter. She was a member of the Catholic Daughters of the Americas, St. Joseph Court, and Sheen's Colleens. She especially enjoyed spending time with her family. In her earlier days, she loved to bowl, play tennis, and volunteer at Sacred Heart School. She was an avid Steelers Fan. She loved to watch her grandchildren and great grandchildren and looked forward to every Thursday's family game night. She is survived by daughter and son-in-law Pamela J. "Pam" and Ross Naumann of Sykesville; son James M. Hoyas of Houston, TX; grandchildren: Adam Naumann and wife Gina, Ashley Kashishian and husband Ben, Josh Naumann and girlfriend Allyson, Abby Naumann and boyfriend Dan, Jenna Naumann, Jessica Naumann and Ava Naumann; great-grandchildren: Savanna, Brett, Maceo and Jake; and many nieces and nephews who she loved dearly. Lee was predeceased by a grandson Johnathon Naumann and siblings James, Sara Katherine, Mary and Elizabeth. A graveside service for family and friends will be held on Saturday, March 27, 2021 at 11am at Lake View Memorial Park, 2724 Liberty Road, Sykesville. The family wishes to extend their heartfelt thanks to Dr. Kruter, Dr. Freiji, Carroll Hospital Center, Carroll Hospice, Val (a special caregiver) and Dianne Bastress ( a dear friend). Those desiring may make memorial donations to Carroll Hospice, 292 Stoner Avenue, Westminster, MD 21157. Online condolences may be offered at www.haightfuneralhome.com

Leona Hoyas, age 86, of Sykesville, passed peacefully on Thursday, February 25, 2021, at home, surrounded by her family. Born March 2, 1934, in Vintondale, PA she was the daughter of the late James Samitore and Grace Brown Samitore. She... View Obituary & Service Information

The family of Mrs. Leona M. Hoyas created this Life Tributes page to make it easy to share your memories.

Send flowers to the Hoyas family.