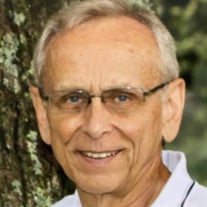 Larry Gordon Orwig of Glenelg, Maryland passed away Sunday, November 14, 2021, surrounded by his family. Larry was born February 14th, 1943, in Canton, IL to Ray and Barbara Orwig. Larry attended Canton Community College and graduated with honors. From there he attended Illinois State University and went on to work 30+ years at Baltimore Air Coil. This employment took the family from Illinois to California and finally Maryland. After retirement, Larry began working for World Relief where he traveled the world in support of the program’s humanitarian mission. In addition to Larry’s career, he was active with the Glenwood Lions Club where in part he supported the Jr. Leo Clubs for Bushy Park Elementary and Glenwood Middle Schools. Larry was very active with his church, Crossroads Church of the Nazarene in Ellicott City. He spent many years serving on various church councils, church boards and doing missionary work. In addition to his many hours spent volunteering, Larry was also an avid bicyclist and spent many hours of the summer in his garden. Larry is survived by his beloved wife of 58 years, Judith Aldrich Orwig, daughter, Kimberly (husband Tim) Feaga of Woodbine, MD, and son, Stephen (wife Tracy) Orwig of Sykesville, MD. He is blessed with three grandchildren, Mitchell Feaga, Ellie Feaga and Tyler Orwig. Additionally, Larry is survived by his brother Duane (wife Jan) Orwig of Washington IL and sister, Marilyn (husband Rich) Davis of Lincoln, IL as well as brothers and sisters-in-law and many nephews and nieces. Visitation will be at Haight Funeral & Chapel, 6416 Sykesville Rd., Sykesville on Friday, November 19, 2021, from 2 to 4PM and 6 to 8PM. A service in Larry’s memory will be held at the Crossroads Church of the Nazarene, 2750 Rogers Avenue in Ellicott City on Saturday, November 20, 2021, at 10AM. In lieu of flowers, donations in Larry’s memory may be made to the Glenwood Lions Club. Donations can be mailed to Glenwood Lions Club PO Box 42, Glenwood, MD 21738. Please indicate Larry Orwig Memorial Scholarship in the memo of the check.

The family of Larry Gordon Orwig created this Life Tributes page to make it easy to share your memories.

Send flowers to the Orwig family.