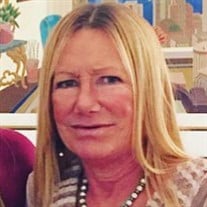 Kimberly Ann Sheldon (née Collier) passed away unexpectedly on Thursday July 2nd, her 32nd wedding anniversary, due to complications related to dehydration. Kim grew up in her parents’ home, Tom and Lois Collier, on Fern Way in Eldersburg, MD with her two older sisters, Carol and Janet. As a young girl, Kim would run across her lawn with her arms spread out like a bird singing the lyrics to “Born Free,” a song that truly portrays her free spirit. Kim treasured the local community so much, she decided to live there for the rest of her life. Since she was a child, Kim put her heart into everything she set her mind to. She could throw a softball as hard as anyone we know, was a talented baton twirler, a Liberty High School cheerleader, and even played violin in the “All-County” orchestra with Lorenza Ponce, a rock violinist who toured with Bon Jovi. Kim was a member of the first graduating class of Liberty High School (class of 1982) and graduated from Villa Julie College with straight A’s. Her deep love for the town she grew up in and the people in it was reflected in her passion for giving back to the community. She served as a treasurer for Messiah Lutheran Church, was an active member in the PTA at Piney Ridge Elementary School, served on the Evans Meadow Community Association Board, and worked hard to help plan high school class reunions. More recently, many people will recognize Kim as an active member of Sykesville and Eldersburg online Facebook communities who was never afraid to speak her mind, and proudly so. Kimberly worked for Signet Bank (now Wells Fargo), which is where she met her husband, Eric Sr. She subsequently worked for the First National Bank of Maryland and at Semmes, Bowen & Semmes as a Trust Officer. After having children, Kimberly decided to dedicate her time to being a stay-at-home Mom. She took great pride in cheering on her children at all of their sports games, helping them with school projects, and being someone they could rely on, no matter what. She was constantly emphasizing how proud she was of her daughter for being in medical school and she loved sharing how her late son, Eric Jr., took after her in so many ways. Anyone who knew Kim also knows she was a dedicated dog Mom, dating back to when she got her first dog (Taffy) in 1966, when Kim was just two years old. Before marrying her husband, she made it clear to him that her dog at the time, Misty, was a nonnegotiable “part of the deal.” She was a dog mom for six different dogs over the years, and is survived by two of her dear Siberian Huskies, Cali and Chaos. There was no living being too big or too small for Kim’s love. Notably, she nursed a wild baby mouse back to health, saved frogs from drowning in her swimming pool, and rescued local snapping turtles when they were in danger of being malnourished. Kim had an adventurous spirit and enjoyed everything from admiring the harvest moons in her backyard, taking photographs of orbs, soaking up the sun for hours at her swimming pool, drinking Strawberry Daiquiris, riding with her friends on motorcycles, and going for a cruise in her Chevy Camaro Super Sport. She truly believed she was put on this Earth for a purpose, which included caring for others and supporting people during times of crisis. Her husband strongly feels as if she brought out the best in him, reminding him not to take life too seriously and always putting a smile on his face. She would spend hours on St. Patrick’s Day, her husband’s birthday, diligently cooking him his favorite meal of glazed corn beef and cabbage. Words cannot fully capture the beauty of Kim’s life, nor can they express how much her family and friends will miss her. We can, however, listen to “Free Bird,” cherish her memory, and smile, as she would want us to. Kim was survived by her husband, Eric Sheldon, Sr.; her daughter, Jenna Sheldon; her sisters Carol Collier and Janet Shrader; along with many nieces, nephews, great nieces and great nephew; and her two Siberian Huskies, Cali and Chaos, all of whom she loved deeply. She was predeceased by her son, Eric Sheldon, Jr.; and her parents Tom Collier and Lois Lendle. In lieu of flowers, Kim’s family is requesting those who wish to contribute, to provide a donation to the Humane Society of Carroll County in Kim’s Honor. Kim’s family invites those who wish to pay their respects to join us at Lakeview Memorial Park, 2724 Liberty Road in Sykesville for a brief socially distanced gathering to celebrate her life on Saturday, July 11th at 11:30am.

The family of Mrs. Kimberly Ann Collier Sheldon created this Life Tributes page to make it easy to share your memories.

Send flowers to the Sheldon family.