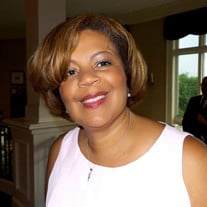 Juliet Jennifer Dodd-Osborne was born on February 20, 1954, in the town of Oracabessa, in the parish of St. Mary, Jamaica West Indies; she is also affectionately known as Dawn to her family and close friends. Juliet went to her rest at her home in Sykesville, Maryland on Saturday, November 27, 2021. She was the daughter of Meryl Victoria Fannell and John Napoleon Dodd, Sr. Juliet spent her early years living with her maternal grandmother, Maud Fannell, in Faith, Oracabessa where she began her childhood education at the Oracabessa Primary School. At the age of seven she went to Kingston, Jamaica to live with her mother where she continued her primary and her high school education. In 1972 she completed the Cambridge University General Certificate of Education ordinary level curriculum in English, History, Geography, Chemistry, Biology and Mathematics at Excelsior High School in Kingston. After high school graduation, she was accepted into the registered nurse training program at the University of the West Indies Hospital School of Nursing in Jamaica where she received her certification as a Registered Nurse in 1975. She began her nursing career as a staff nurse at the Annatto Bay public hospital in Annatto Bay, St. Mary, Jamaica in 1975. She remained at Annatto Bay hospital until 1979 when she was recruited to work as a registered nurse at Mount Sinai Medical Center in Miami Beach, Florida. In 1981 she moved from Miami to the metropolitan Maryland/Washington DC area where she worked at several hospitals including the Washington Adventist and Holy Cross hospitals as a staff nurse and charge nurse. She continued her nursing education while working and she obtained her Bachelor of Science degree in nursing from Marymount University, Arlington, Virginia in 1985. In 1988 she met her husband Julian, and they were married in June 1990. To that union two sons were born, Brandon and Colin both of whom she inspired to become U.S. Navy officers. She also had a stepson, Cedric Osborne. Soon after they were married, Julian’s career with the U.S. Navy required them to move from their home in Silver Springs, Maryland to Grafton, Virginia closer to his post at the U.S. Naval Base in Norfolk Virginia. While in Virginia, she continued her nursing career with the Veteran Administration (VA) Hospital system and she also completed a Master of Science degree in nursing at Hampton University, Hampton, Virginia, and the Nurse Practitioner certification in 1995. Another career assignment by the U.S. Navy resulted in a relocation of her family back to Maryland in 2000 and they settled in Sykesville, Maryland close to Julian’s new work assignment as a recruiter for the Navy in Catonsville, Maryland. Juliet continued her career as a Nurse Practitioner at the VA hospital in Baltimore, Maryland. She particularly enjoyed her new work. Her work and research covered many areas of endocrinology which included kidney research. She also provided primary health care to military veterans. Her courageous battle with cancer began in 2001, which led to her early retirement from the VA hospital system in 2013. She had a wide circle of friends, enjoyed travel, entertaining and dinner parties at her home. She was very attentive to the needs of others especially her family members. Left to mourn her passing is her beloved husband of 31 years U.S. Navy Chief Petty Officer (Retired) Julian Osborne, her sons U.S. Navy Lt. Brandon Osborne and Entrepreneur Colin Osborne; brothers: Lloyd Dodd, John Dodd, Dennis Dodd; sister: Joy Dodd-Duncan; Father-in-law: Wendell Osborne (Cora); aunts: Carol Hudson and Hazeline Brown; uncle: Euan Fannell (Dorothy); sisters-in-law: Dr. Nuria Feit (Marvin), Hon. Judge Marla Anderson (Fred), Nelda Stanford (Jerry); brother-in-law: Eliecer Gutierrez; nieces, nephews, cousins, and a host of other relatives and close friends. Preceding her in death were her stepson Cedric Osborne, her mother Meryl Fannell, her father John Napoleon Dodd, Sr., her mother-in-law Maria Nunez, her sister: Evadne Dodd, her brother: Horace Dodd; her sister-in-law: Yvette Osborne; brothers-in-law: Erick, David, and Carlos Nunez. The family will receive friends from 5 to 7pm on Sunday, December 19, 2021, at Haight Funeral Home & Chapel, 6416 Sykesville Road, Sykesville, MD 21784. The family will also receive friends from 10 to 11am on Monday, December 20, 2021, at Ellicott City Seventh Day Adventist Church, 3291 St. Johns Lane, Ellicott City, MD 21043 where a celebration of life service will follow at 11am. A livestream of the service may be viewed at either https://www.youtube.com/c/EllicottCityChurch or https://www.facebook.com/ellicottcitychurch Interment to follow in Crest Lawn Memorial Gardens. Online condolences may be offered at www.haightfuneralhome.com

Juliet Jennifer Dodd-Osborne was born on February 20, 1954, in the town of Oracabessa, in the parish of St. Mary, Jamaica West Indies; she is also affectionately known as Dawn to her family and close friends. Juliet went to her rest at her home... View Obituary & Service Information

The family of Juliet Jennifer Dodd- Osborne created this Life Tributes page to make it easy to share your memories.

Send flowers to the Osborne family.