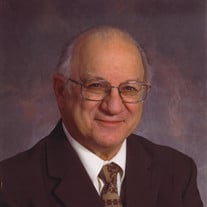 Joseph Olenik of Eldersburg, Maryland passed away on Thursday November 12, 2020 at the age of 78. Born to his parents Steven and Mary Olenik, he spent the majority of his childhood in Kearny, New Jersey. Joe was the oldest of four siblings and loved dearly his sister Maureen, sister Stephanie, and brother Michael. In 1961, Joe enlisted in the United States Air Force and served for 26 years as an electronic intelligence signals analyst stationed in Germany, Turkey, Alaska, the National Security Agency, and the Pentagon. Joe received many medals and commendations for service, and when he retired in 1987, was a Chief Master Sergeant, the highest enlisted level of leadership in the Air Force. From 1966 to 2005, Joe was married to Carol [Staton] Olenik until her passing, and they had one daughter Christina. In 2011, Joe married his second wife Wendy and he had two stepsons Samuel and Alexander. Joe was a fervent community volunteer for many years, participating in the local Eldersburg chapter of the Jaycees, acting as a mentor for the Hugh O’Brien Youth Foundation, and coaching local youth sports. He also loved to watch televised sports, especially football, ice hockey, and soccer; his favorite sports teams were the Baltimore Ravens, Washington Capitals, and Liverpool. Joe loved to play golf and went often with friends and family. Speaking both German and Turkish, Joe loved to travel, and he saw a lot of the world including England, France, Austria, Switzerland, Italy, Greece, and the Caribbean. In recent years, Joe wrote and acted in comedic murder mysteries, he was an avid reader of books, and loved to do the Sunday crossword puzzle from the newspaper. Joe was preceded in death by his parents, sister Stephanie, and first wife Carol. He is survived by his wife Wendy Olenik; stepsons Samuel McIntire and Alexander Olenik; daughter Christina Olenik Lopez and her husband Orlando; granddaughter Erin Mary Lynch; sister Maureen Wharton and her husband Roger; brother Michael Olenik and his wife Frances; sister-in-law Linda [Staton] Sherfey and her husband Larry; nieces and nephews; and many beloved friends. Joseph will be buried in a committal service at the cemetery of St. John Lutheran Church, 827 Leisters Church Rd, Westminster, MD 21157 on Monday, November 16 at 1:00 PM. A full memorial and celebration of his life will take place in the early summer. Friends and family are encouraged to reach out to his wife at [email protected] to be kept informed. People wishing to honor Joe are invited to make donations to Carroll Hospice, 292 Stoner Avenue, Westminster, Maryland, 21157.

Joseph Olenik of Eldersburg, Maryland passed away on Thursday November 12, 2020 at the age of 78. Born to his parents Steven and Mary Olenik, he spent the majority of his childhood in Kearny, New Jersey. Joe was the oldest of four siblings and... View Obituary & Service Information

The family of Mr. Joseph Olenik created this Life Tributes page to make it easy to share your memories.

Joseph Olenik of Eldersburg, Maryland passed away on Thursday...

Send flowers to the Olenik family.