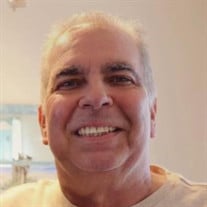 Joseph "Joe" Albert Green. age 61, of Fulton, was called home on Wednesday, September 22, 2021, after a hard five year battle with cancer. He passed peacefully at Gilchrist Hospice surrounded by his wife and children. Born April 8, 1960, in Washington, DC he was the son of Laura and Bob Green of Dayton, MD and late Joseph Albert Monaco. He was the devoted husband of Colleen Sullivan Green. From a young age Joe had a profound passion for cars and became a Mercedes Auto technician. When Joe wasn’t in the garage you could find him spending time with his wife, Colleen, and their children and grandchildren. He had a love for Nascar and spending time with his family and friends at his vacation home in Ocean City MD. Joe was loved and adored by everyone who knew him. Surviving in addition to his wife and mother are children and their spouses: Lisa and Zach Ward of Manchester, Stacy Martinet of San Jose, CA, Lisa Pope of Ellicott City, Sara and Chad Coon of Augusta, WV, Joseph F. "Joey" Green of Fulton and Jessica "Jessie" Green and her companion Matt of Fulton; siblings: Mary, Maggie, Paul, John "Bo", Kathy and Jenny and grandchildren: Shelby, Colton, C.J., Hailee, Jaxson, Jed and Oscar. The family will receive friends from 2 to 5pm on Sunday, September 26, 2021 at Haight Funeral Home & Chapel, 6416 Sykesville Road, Sykesville. A Catholic funeral liturgy will be held at 11am on Monday, September 27, 2021 at St. Joseph Catholic Community, 915 Liberty Road, Eldersburg. Interment will follow in Mt. View Cemetery, Marriottsville. In lieu of flowers, those desiring may make memorial donations to Gilchrist Hospice of Howard County, 5537 Twin Knolls Rd., Columbia, MD 21045. Online condolences may be offered at www.haightfuneralhome.com

The family of Joseph "Joe" A. Green created this Life Tributes page to make it easy to share your memories.

Send flowers to the Green family.