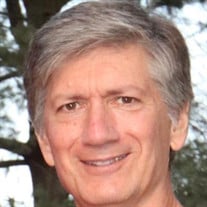 John Michael Napolitano Jr., age 59, of Sykesville, passed away suddenly on Saturday, September 5, 2020, at home. Born November 13, 1960, in Washington, DC he was the son of the late John Michael Napolitano, Sr. and Patricia Donovan Napolitano. He was the husband of Kellie Ann Hunt Napolitano. John held many roles in his life and he filled them all with love and devotion - Husband, Father, Son, Brother, Cousin, Uncle and Friend. Born in Washington, DC, John grew up in Lanham, Maryland as the middle child of John and Patricia with his siblings and many friends. He graduated from DuVal High School in 1978 and from the University of Maryland in 1983 with a BS in Computer Science. John spent his career as a government employee and contactor with the National Security Agency as a Network Engineer where he was a valued coworker. John's primary passion in life was his family. He was never as happy as when he was doing things with and for his family. He shared all of his hobbies and interests with them. He was an avid fan of the Washington Redskins, NY Yankees and the MD Terps and regularly attended games for all. For years, Spring Training in Florida was an annual family event. Most of his free time was spent working on his home and yard in which he took great pride. He also enjoyed traveling with his family, especially to the beach. John worked hard in all aspects of his life and found peace and relaxation at the beach. Surviving in addition to his wife are sons: John Michael Napolitano, III, Joseph Carmine Napolitano, Anthony Patrick Napolitano and Michael Thomas Napolitano all of Sykesville; brothers and sisters-in-law: Bill and Karen Napolitano, Dan and Jill Napolitano; sisters and brothers-in-law: Cindy and Alan Cline and Rose and Rick Knight and father-in-law and mother-in-law Bob and Kay Hunt. He is also survived by many nieces and nephews. A funeral liturgy will be held on Saturday, September 12, 2020, at 11am at St. Joseph Catholic Community, 915 Liberty Road, Eldersburg. Interment will follow in Springfield Cemetery, Sykesville. In lieu of flowers, memorial donations may be made to the National Brain Tumor Society in honor of his late mother and nephew. Online condolences may be offered at www.haightfuneralhome.com

The family of Mr. John M. Napolitano Jr. created this Life Tributes page to make it easy to share your memories.

Send flowers to the Napolitano family.