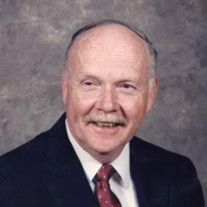 John Robert Culleton, Jr of Eldersburg, MD, died peacefully at his home on November 12, 2021 at the age of 89. John was born on August 25, 1932. John graduated from University of San Francisco, served in the Army and afterward he went to work for the federal government. John was devoted to his church and his children. He was the Past President of the Sykesville Middle School PTA, Member of the Knights of Columbus, and coached basketball for St. Joseph's Catholic Church. He loved to sing in the church choir and was very vocal about his political views. He wrote a column every other week for years in the Carroll County Times. Some of John's hobbies were racing cars, amateur radio, and breeding and raising dogs. He was also past President of the Carroll Kennel Club. He is predeceased by his parents, John Robert and Helena Culleton and his sister, Catherine Culleton. He is also predeceased by a son, Charles Taylor. He is survived by his spouse of 34 years, Peggy Culleton; their children, Cheryl “Bunny” Hellman, John Robert Culleton, III and wife Kathy, Judith Anne Stambaugh and husband Charles, Margaret “Margo” Miller and husband Joe, Kenneth Taylor and companion Ruth, Richard Taylor and wife Marianne, Timothy Taylor and wife Lisa; he has 25 grandchildren and 11 great grandchildren, and their dog Sam. He is also survived by his sister Mary Anna Colwell and many nieces, a nephew and great nieces and nephews. The family will receive friends on Monday, November 22, 2021 from 2-4pm and 6-8pm at Haight Funeral Home & Chapel, 6416 Sykesville Rd., Sykesville. Funeral liturgy will be held on Tuesday, November 23, 2021 at 12:00 PM at St. Joseph Catholic Community, 915 Liberty Rd., Eldersburg, MD 21784. Interment will be in Garrison Forest Veterans Cemetery, Owings Mills.

John Robert Culleton, Jr of Eldersburg, MD, died peacefully at his home on November 12, 2021 at the age of 89. John was born on August 25, 1932. John graduated from University of San Francisco, served in the Army and afterward he went to work... View Obituary & Service Information

The family of Mr. John Robert Culleton Jr. created this Life Tributes page to make it easy to share your memories.

Send flowers to the Culleton family.