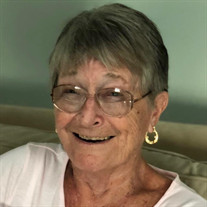 JoAnn Mary Bozentka, age 89, of Eldersburg, died Friday, January 14, 2022, in Westminster. Born September 21, 1932 in Baltimore, she was the daughter of the late John and Helen (Grochowski) Kaszak. She was the wife of the late Mitchell “Rube” Bozentka. Throughout JoAnn’s life, sports were always a top priority — Baltimore football, lacrosse, and baseball, in that order. She started her love for football as a teenager when she became one of the first majorettes for the original pro football team that came to Baltimore, which eventually became the Baltimore Colts. She loved her family and her friends, but when it came to football season, that was Ravens time. She went to Baltimore Colts games for over 30 years and she became a Ravens fan once the team moved into the area in 1996, and she was one of the original PSL owners at M&T Bank Stadium. Having grown up in Baltimore, she loved everything about it. She also had a love for the beach, never missing a summer of going to Ocean City until her later years. JoAnn was very proud of her grandchildren and their spouses, as well as her great grandchildren which brought her great joy throughout her life. She also loved and enjoyed her nieces and nephews. Her original career started as a Licensed Practical Nurse, but later went to work for Westinghouse where she worked for 27 years as an Inspector. Her survivors include her daughter and son-in-law, Mary “Jo” and Brian Fitzgerald; son-in-law, Herb Gunther; grandchildren and spouses, John and Elizabeth S. Fitzgerald and Joseph and Elizabeth M. Fitzgerald; and four great-grandchildren, Evan, James, Sarah and Owen Fitzgerald. JoAnn was predeceased by her daughter, Karen Elberskirch, and her sister, K. Bernice “Bunny” Rice. The family will receive friends on Saturday, February 5, 2022, from 10-11am at Haight Funeral Home & Chapel, 6416 Sykesville Road, Sykesville where a Memorial Prayer Service will follow at 11am. In lieu of flowers, donations may be sent to Carroll Hospice, 292 Stoner Avenue, Westminster, MD 21157.

The family of Mrs. JoAnn Mary Bozentka created this Life Tributes page to make it easy to share your memories.

Send flowers to the Bozentka family.