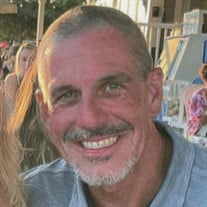 Jeffrey Alan Lupfer, age 57, passed away suddenly on Monday, November 22, 2021. Born February 19, 1964 in Harrisburg, PA. He was the beloved husband of 33 years of Lisa Roberts Lupfer, father of Alexis Lupfer Jones (husband, Nicholas Jones) and Haley Lupfer Aufmuth (husband, Riley Aufmuth), and Pop Pop of Jessa Rae Jones. He was the son of Alan and Judith Lupfer and son-in-law of John and Marilyn Roberts. Jeff’s favorite times were spent with his family and friends. His fondest memories were of family summer vacations on the beach in the Outer Banks of North Carolina. One of his many joys was coaching his daughters and their friends throughout the years. Jeff enjoyed playing tennis and bike riding with his wife; and golfing and sampling IPAs with his friends. He cherished being with his first granddaughter, Jessa, and making her smile. He loved spending time hunting in the mountains, joy rides in his Camaro, and his 11 pound dog Addy. He was an avid Penn State and Steelers fan. Jeff’s joy and laughter lit up every room. His smile was contagious and he made a friend everywhere he went. He was a role model to many, with a heart that was bigger than he was. He was a genuine person who never had a bad word to say about anyone. He will be deeply missed by anyone who was lucky enough to know him. Surviving in addition to his parents, wife, children, and granddaughter, are his sisters Kristin Sullivan (husband, Brian Sullivan) and Lorene LeQuang (husband, Frank LeQuang), and his brother Eric Lupfer (wife, Cathy Lupfer); and all of his nieces and nephews. The family will receive friends on Sunday, December 5, 2021 from 10 am to 1 pm at Haight Funeral Home & Chapel, 64416 Sykesville Road, Sykesville, where a Memorial Service will follow at 1pm. Those desiring may send donations in his honor to the American Heart Association or St. Jude’s Research Hospital Online condolences may be offered at Haight Funeral Home We will love you forever

The family of Mr. Jeffrey A. Lupfer created this Life Tributes page to make it easy to share your memories.

Send flowers to the Lupfer family.