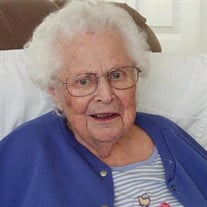 Janet Grace Stevens (nee Theofield), age 87, of Highland, MD, passed away on Friday, January 14, 2022, surrounded by all 3 daughters. Born October 13, 1934 in Myersville, MD, she was the daughter of the late John P. Theofield, Sr. and Grace A. (Poole) Theofield. She was the wife of 59 years to Charles Edward Stevens, who predeceased her in 2015. Janet was raised in Silver Spring, MD. She graduated in 1954 from Montgomery Blair High School and attended the University of Maryland, College Park where she met her husband. She retired from Howard County Public School System in 1987. She had many talents including gardening, sewing, baking, and art. She enjoyed traveling and camping in the U.S., but most of all, enjoyed spending time with her family. She was a treasured mother and mom-mom who will be dearly missed. Surviving are daughters and sons-in-law; Janet Elizabeth Sowers of Marriottsville, Christine Eve and C. David Thompson of New Windsor, and April Lynn and Michael C. Blaney of Glenville, PA (formerly of New Windsor); grandchildren, Theo and Amanda Sowers, Jacob Sowers, Nicholas and Erin Thompson, Hannah and Matthew Gray, Robert and Lindsey Blaney, Alex Blaney, and Amanda Blaney and her fiancé Luke Miltenberger; great-grandchildren, Henry and Ridgely Sowers, Liam and Everett Thompson, and Lucy Gray. She is also survived by 3 nieces, Hope, Bonnie and Jean and their mother Mary, and several cousins and extended family. She was predeceased by siblings, Alice, John, Robert, and Truman Theofield, Truman’s wife Sherri and their daughter Dawn, as well as extended family members. The family will receive friends on Sunday, January 23rd, from 1-5 pm at Haight Funeral Home & Chapel, 6416 Sykesville Road, Sykesville where a funeral service will be held on Monday, January 24th, at 10 am. Interment to follow at Grossnickle Brethren Cemetery, 11301 Meeting House Road, Myersville, MD 21773. In lieu of flowers, memorial donations may be made to St. Jude Children's Research Hospital, 501 St. Jude's Place, Memphis, TN 38105 or a charity of your choice. Online condolences may be made at www.haightfuneralhome.com

Janet Grace Stevens (nee Theofield), age 87, of Highland, MD, passed away on Friday, January 14, 2022, surrounded by all 3 daughters. Born October 13, 1934 in Myersville, MD, she was the daughter of the late John P. Theofield, Sr. and Grace... View Obituary & Service Information

The family of Mrs. Janet Grace Stevens created this Life Tributes page to make it easy to share your memories.

Send flowers to the Stevens family.