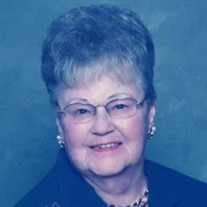 Jane W. Smedley, 99, of Tavares, Florida passed away peacefully on October 6, 2021. Jane was born on July 10, 1922 in Baltimore, Maryland to Bryan and Roberta (McFee) Williams. She attended local schools including Western High School, an elite girls school and Strayer Business College, both in Baltimore. For many years Jane was a keypunch operator for General Motors and an administrative aide for St. Agnes Hospital, again in Baltimore. Jane moved to Florida in 2000, at age 78 and immediately immersed herself into the community. Game nights with friends were a favorite and she loved board and card games that included; Canasta, Mahjong and Mexican train. A social person, she was very active in the TOPS club in The Plantation and encouraged others to join in. Jane loved butterflies and bird houses and decorated her home with both. She was a reliable and trusted friend to everyone around her. Jane is survived by her children; Marty (Arlene) Smedley of Leesburg, FL, Jim (Gloria) Smedley of York, PA. and Jan McCully of New Port Richey, FL. She also leaves eight grandchildren; Mike (Hope) Smedley and Scott (Shannon) Smedley; Kerrie (Patrick Brewer) Smedley, Tina (Billy) Nickey, James (Darcy) Smedley, Cathy (Michael) Zaremba; Chris (Danielle) McCully, Erica (Kevin) McFarland; 12 great-grandchildren and 2 great-great-grandchildren. Jane is also survived by a sister, Helen Green of Beaverton, OR. Jane was predeceased by her husband Leo “Buck” Smedley. They were married in 1942 and he died in 1977. She was also predeceased by her longtime friend John Schilling, who died in 1999. A Celebration of Jane’s Life will be held on Saturday, October 30 at 11:00 AM at Haight Funeral Home & Chapel, 6416 Sykesville Road, Sykesville, MD 21784. Burial will be immediate following the memorial service at Lake View Memorial Park, 2724 Liberty Road, Sykesville, MD 21784. Donations in her memory may be made to: St. Jude’s Children’s Research Hospital. 501 St. Jude Place Memphis, TN 38105.

The family of Jane W. Smedley created this Life Tributes page to make it easy to share your memories.

Send flowers to the Smedley family.