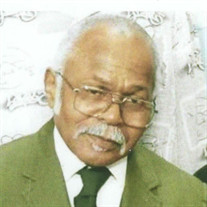 James David Groomes, 95 of Taneytown, MD was called home to be with his Lord and Savior on April 2nd, 2021. Born April 19th, 1925 in Howard County, Maryland, he was the son of the late John Henry Groomes and Sallie Stanton Groomes. He was the husband of the late Sevilla Esther Johnson Groomes. James, whom we know as Jim, proudly served in the US Navy between 1944-1946, which he served in Grenada during World War II. He was a short patrolman, and a Golden glove boxer while he served in the military. Upon returning home after his two years of duty, he became a truck driver with the Lambert Cecil Company and Sonny Dorsey Trucking. He had gone to Standard Supply Company in Gaithersburg, MD where he had retired as a flatbed driver. After retirement, he enjoyed landscaping, that was his passion. He took pride in working in the yard creating flower gardens and trimming of lawns. He had done this until the age of 93. He would also walk 2-3 miles a day regularly, weather permitting. He enjoyed babies to the utmost, and spending time with his grandchildren. James was a member of Daisy Methodist Church in Howard County. He sang in the men's choir. James is survived by his son James Donnell Groomes (Vanessa) of Taneytown, MD, brothers Lawrence Stanton of Howard County, MD, and Warren Stanton of Norfolk, VA, sister Phyllis Groomes of Pennsylvania, and by numerous grandchildren, great grandchildren, nieces and nephews. James is predeceased by brothers John Henry Groomes Jr., Charles Groomes, Edward Groomes, and Lewis Groomes, sisters Elizabeth Dorsey, Carrie Stanton Powell, and Katy Mae Groomes, daughter Joann Groomes Brooks, and by grandsons Clyde Brooks, and Steven Brooks. Funeral services will be held on Monday, April 12, 2021 at 7:00 PM at Haight Funeral Home & Chapel, 6416 Sykesville Rd., Sykesville with Rev. Jessie Sherrod officiating. The family will receive friends at the funeral home on Monday, April 12, 2021 from 2-4pm and from 6pm until the start of the service. Wearing masks and social distancing will be required at the funeral home.

James David Groomes, 95 of Taneytown, MD was called home to be with his Lord and Savior on April 2nd, 2021. Born April 19th, 1925 in Howard County, Maryland, he was the son of the late John Henry Groomes and Sallie Stanton Groomes. He was... View Obituary & Service Information

The family of Mr. James David Groomes created this Life Tributes page to make it easy to share your memories.

James David Groomes, 95 of Taneytown, MD was called home to be...

Send flowers to the Groomes family.