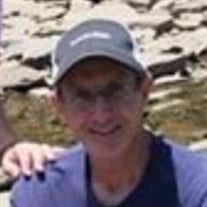 James Albert Evans, age 74 of Eldersburg, passed away Monday, August 30, 2021. Born April 9, 1947 in Baltimore, he was the son of the late Howard J. Evans and the late Delores Heuttle Evans. He was the husband of the late Karin Grace Evans who passed away in 2011. The greatest details to describe James Evans is that he served his country as a Sergeant in the USAF and when he finally received his honorable discharge he met the love of his life. On 7/15/1972 James Evans married his beautiful bride Karin and began to raise a family. He was blessed to raise 3 beautiful daughters. He worked as a Tree Surgeon Expert all his life until he retired. He watched as both his oldest daughters became extremely successful with their careers. His youngest daughter got married and his son-in-law became his best friend. It was like the son he never had. His youngest daughter & son-in-law blessed James with two exceptional grandchildren, one beautiful girl and one handsome boy. James was a gentle man who was passionate about wildlife, fishing, hiking & family. Later in life as his wife grew ill he never left her side and cared for her until the day she passed. James continued to be a remarkable man, father and friend. He lived the rest of his life doing the things he enjoyed most. His favorite was traveling with his son-in-law to and from one West Virginia where he bonded with him over many projects. He was always excited to visit his friends up on the mountains. He enjoyed the beauty of nature and the serene landscape all around him. The memory of James Evans will live on in the hearts of his family & friends for eternity. There are not enough words to describe him and he will be missed ever so dearly Surviving are his children Traci Evans Chapman, Kristi Evans, and Carrie Walker and her husband Donald Walker Sr., grandchildren Kiersten Walker and Donald Walker Jr., sisters Judy Hieatzman and Barbara Blockston, and brother Howard Evans Jr. He was predeceased by his sisters Mary Collier and Sharon Stiegler. The family will receive friends on Tuesday, September 7, 2021 from 2-4pm and 6-8pm at Haight Funeral Home & Chapel, 6416 Sykesville Rd., Sykesville. Funeral services will be held on Wednesday, September 8, 2021 at 12 noon at the funeral home. Interment in Woodlawn Cemetery, Baltimore.

James Albert Evans, age 74 of Eldersburg, passed away Monday, August 30, 2021. Born April 9, 1947 in Baltimore, he was the son of the late Howard J. Evans and the late Delores Heuttle Evans. He was the husband of the late Karin Grace Evans... View Obituary & Service Information

The family of James Albert Evans created this Life Tributes page to make it easy to share your memories.

Send flowers to the Evans family.