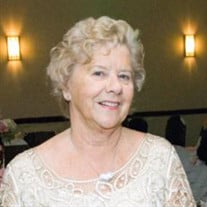 Jacqueline Siegert passed away peacefully on September 13, 2020 at Lorien Encore Turf Valley. This marks the end of a beautiful life filled with love. Jackie was born on July 19, 1929 in Baltimore, Maryland to parents Velma Pearl and George... View Obituary & Service Information

The family of Jacqueline Siegert created this Life Tributes page to make it easy to share your memories.

Send flowers to the Siegert family.