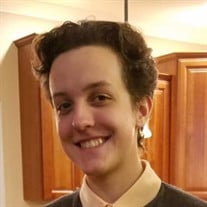 Jacob William Bandel March 16, 1996 – February 13, 2022 Jacob “Jake” Bandel passed away due to injuries sustained in an automobile accident early Sunday morning, February 13, 2022. He was 25 years old. Jake lived in Howard County, Maryland. In his primary school years, Jake was regularly active in the Howard County 4H shooting club, the Methodist Church, and held a variety of part-time jobs at local businesses including Larriland Farms in Woodbine, and the Black Belt Institute in Glenelg, MD as a Tai Kwon Do assistant instructor. He was an active member of Sea Scout ship Columbia Ranger #361 and had a great love of the water; boating, sailing, and kayaking with his family and friends. Like his father, grandfathers, and great-grandfathers, he had a love of “tinkering” on various hobbies and projects, such as maintaining and driving his vintage cars including his favorite, his 1974 MGB. He enjoyed good food and drink, video gaming, 3-D printing, and the shooting sports and reloading, for which he was a member of multiple clubs. He was also a self-taught computer “geek” who generously shared his time and expertise with friends and family. After graduating from Glenelg High School in 2014, he attended Howard Community College studying business administration. He read voraciously subjects ranging from the humanities and sciences including physics, natural history, and the arts, and had a strong and lasting interest in political science and social issues. Jake loved travel and did so extensively from a young age with his parents and grandparents, taking trips across the United States. For his 21st birthday he travelled solo to London to take in the sights, particularly the Victoria and Albert Museum, the pubs, and nightlife of the city. He enjoyed mixing with locals he met and immersing himself in the local culture. He later visited Prague and the Czech Republic, also solo. When not planning or fulfilling his wanderlust, Jake particularly enjoyed simply creating and spending quality time with family and friends, and delighted in hosting cookouts whenever the weather permitted. At the time of his passing, he enjoyed his career working in the Washington, D.C. area as an HVAC controls engineer for Pritchett Controls’ New Construction division, installing and troubleshooting complex building environmental control systems. Jake was extremely sensitive to the needs of those less fortunate, and he found his own way to make a small but important difference. He was known to carry new socks, small bills, and cleansing wipes in his backpack to give to those he encountered who might appreciate them – and to his sadness, found many who did. Jake will be remembered as a young man who from early childhood, displayed an infectious enthusiasm for life, a frequent mischievous twinkle in his eye, and, as his cousin Lydia now describes it, the “confident smile of a door-to-door salesman.” He was a joy to be around, a beloved son, grandson, nephew and cousin, and a devoted friend who was taken from us way too soon. He will be greatly missed. Jake is survived by his immediate family and was the beloved son of David and Amy Bandel, and brother Jonathan Bandel. On his father’s side he is survived by grandmother Marilyn Bandel; aunt and uncle Cheryl and Scott Wingate; great-aunts and uncles: Ann and Don Bandel, Ellen and Bruce Rindfuss, Peggy and Piet Van Huizen; cousins Lydia Wingate, Braden Wingate, Lisa Bandel and Steve Bandel. On his mother’s side he is survived by grandmother Sandy Gregory, grandparents Earl Gregory and Barbara Neubarth, grandparents Tom and Carol Rucker; uncle Eric Gregory and aunt Erin Stevenson. He is also survived by a loyal and longstanding circle of friends known affectionately by the family as “The Lads.” Visitations will be held Thursday, February 24, 2022, at Haight Funeral Home & Chapel, 6416 Sykesville Road, Eldersburg, MD from 2:00-4:00 PM and 6:00-8:00 PM. A service will be held on Friday at 10:00 AM at Glenelg United Methodist Church in Glenelg, Maryland. Interment will be at a later date and private to immediate family and friends, by invitation. In lieu of flowers, donations may be made to Saint Vincent de Paul of Baltimore and designate Jake (Or Jacob) Bandel as honoree. https://www.vincentbaltimore.org/ways-to-give/ Online condolences may be offered at www.haightfuneralhome.com.

The family of Jacob William Bandel created this Life Tributes page to make it easy to share your memories.

Send flowers to the Bandel family.