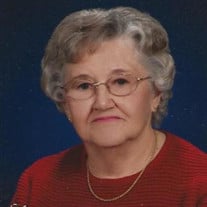 Hilda Fleming Morris, age 96, passed away on Saturday, June 5, 2021, at Heartfields Assisted Living Facility in Easton, Maryland. Born January 15, 1925, in Woodbine, Maryland, she was the daughter of the late Edward Fleming and Nettie Haugh Fleming. She was the wife of the late John George Morris, who died in 1994. Hilda had worked as a rehabilitation therapist at the Springfield Hospital Center in Sykesville, Maryland for many years; before transferring to the Eastern Shore Hospital Center in Cambridge, Maryland. To her family, she will always be known for her signature fresh coconut cake and crab soup. In addition, Hilda enjoyed crocheting, gardening, sewing, and cooking. She could not throw any piece of a flower away. Instead, she would plant it in a pot of dirt, and, with her magic, it would grow. As a result, her house was always filled with plants and flowers. She was a longtime member of Morgan Chapel United Methodist Church in Woodbine, Maryland, and then at Centreville United Methodist Church in Centerville, Maryland, after relocating to the Eastern Shore. She is survived by one sister, Arta Hawkins, of Upper Marlboro, Maryland. Also, she is survived by her son and daughter-in-law Wayne and Pat Morris of Chester, Maryland, and her daughter and son-in-law Gennis Morris and Greg Gilbert of Centreville, Maryland. She is also survived by six grandchildren and eight great-grandchildren. The grandchildren are Sean Morris and wife Marina of Needham, Massachusetts; Ian Morris and wife Brianna of Cherry Hill, New Jersey; Jackie Morris of Dayton, Ohio; Lindsay Gilbert of Centreville, Maryland; Abigail Gilbert of Centreville, Maryland; and John Avery Gilbert of Centreville, Maryland. She was predeceased by brother Donald Fleming and sister Doris Jaeger. In lieu of flowers, memorial donations may be made to the Talbot County Hospice 586 Cynwood Dr. Easton, MD 21601 or to Morgan Chapel Cemetery 3001 Flag Marsh Rd. Mt.Airy, MD 21771. Online condolences may be offered at www.haightfuneralhome.

The family of Mrs. Hilda Fleming Morris created this Life Tributes page to make it easy to share your memories.

Send flowers to the Morris family.