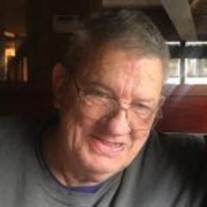 Herbert “Herb” Levere Garver, 79 of Statesville, N.C. and formerly of Sykesville, Md. passed away on April 19, 2021 at Rosewood Assisted Living Facility in Harmony, NC. Herb was born October 18, 1941 in Sykesville, Md. to the late Eugene L. Garver and Myrtle I. Garver. He had been married to Linda Shell (Garver) and then the late Esther Lee Jenkins Garver. Mr. Garver had lived in Maryland most of his life but moved for the second time to Statesville, N.C. in August 2011. In his younger days Herb loved being a volunteer with the Sykesville Fire Department. He had been a professional driver since his teen years. Herb drove for several trucking companies both in Maryland and NC. He also, drove for charter bus companies Eyre Bus Service in Maryland and a company in NC. where he had the pleasure of driving a charter bus for the Charlotte Knights (an Orioles’ farm team at the time) when Billy Ripken played for them. Herb loved NASCAR racing and was a huge Dale Earnhardt fan. Herb is survived by his first wife Linda Shell of Sykesville and sons Barry D. Garver and wife Joan of Denton, Md., David Wayne Garver and wife Wendy of Littlestown, PA and step-sons Wayne R. Jenkins and wife Cherie of Greenville, SC and Randy L. Jenkins and wife Jocelyn of Statesville, NC. Herb had several grandchildren/great grandchildren and several step grandchildren/step-great grandchildren. Herb is also survived by his sister Beverly Jean Fisher of Gamber, Md. as well as a number of nieces and nephews. Herb was predeceased by his wife Esther Jenkins Garver, Parents Eugene and Myrtle Garver, Sister Wanda Eleanora Fleming and Brother Ronald Eugene Garver. Interment will be held at Providence Cemetery behind Calvary United Methodist Church in Gamber, Md. where a graveside service will be held on Friday, April 23, 2021, at 11am. In lieu of flowers contributions may be made to Sykesville VFD, 6680 Sykesville Rd., Sykesville, Md. 21784 or to Hospice of Iredell County, 2347 Simonton Rd, Statesville, NC. 28626, in Herb’s memory.

The family of Mr. Herbert "Herb" Levere Garver created this Life Tributes page to make it easy to share your memories.

Send flowers to the Garver family.