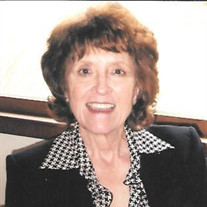 Gloria Woods DiMantova, of Brightview Independent Living in Westminster, MD, died peacefully September 9, 2021, her daughters by her side. Born March 4, 1934, in New York City to parents Walter and Rose Woods. Gloria was the eldest of four daughters, Virginia (deceased), Patricia, and Victoria, an especially weighty responsibility due to the profound deafness of her parents. Dedicated wife to Anthony DiMantova for 65 years until his passing in August 2019. Loving mother of Walter DiMantova (Polly Paulson), Lynda Castillo (deceased) (Robert), Sally Gugliemini (Michael), and Vanessa DiMantova (John Foran). Gloria spent her early years on Elizabeth Street in an apartment building owned and lived in by her grandparents, with a garden and chickens in the back, laundry lines linked between buildings, fire escapes, and all the magic of NYC living. Gloria was the hardest of workers, often holding multiple jobs. Her first was in a bakery as a teenager. She held a professional position on Wall Street for the president of The Bank of New York, a rarity for a woman of that time. She left that position to raise her four children. She held other jobs after her children were grown. No matter the position, she was always recognized for her unmatched work ethic. Always fashion and music forward, politically informed, and intellectually curious, Gloria loved her New York Magazine, The New York Times, and had a lifelong passion for reading and learning. Gloria and Tony traveled extensively and enjoyed seeing the world, often from the deck of a cruise ship. A proud New Yorker for almost 50 years, in 1981 Gloria and Tony moved to their 7 acre “gentleman’s farm” on Cherry Tree Lane in Sykesville. She loved walking the property, reading in the gazebo, and hosting many wonderful family dinners. Gloria was an outstanding cook and aromas from her kitchen will always be remembered with delight. In 1984 Gloria became a grandmother and, from then on, she was known to many as GG. Gaining her license at the age of 52, if you happen to remember a tiny woman in a tiny sports car, driving around Sykesville with the license plate GG, that was her. During these years, much joy was found with her grandchildren running around the property, enjoying the pond, and, of course, seeing the annual crab apple fight. Gloria’s greatest joy was being GG to Nicholas Anthony (Monica), Caitlin Emma (Adam), Dylan Christopher (Alicia), Sarah Elizabeth Rose, Samuel Woods (Erin), Tessa Clare, Jackson Woods, Mathew Michael (Nicole), and Adam Patrick (Ashley). Great GG to Axel Franklin, Nicholas Anthony Jr., Dominic Anthony, and Gianna Lena. They are a beautiful legacy she leaves behind. The family will receive friends Thursday, September 16 from 5-8pm with a celebration of Gloria’s life starting at 7:30pm at Haight Funeral Home & Chapel, 6416 Sykesville Road, Sykesville. Interment Friday, September 17 at Garrison Forest Veterans Cemetery at 10am.

Gloria Woods DiMantova, of Brightview Independent Living in Westminster, MD, died peacefully September 9, 2021, her daughters by her side. Born March 4, 1934, in New York City to parents Walter and Rose Woods. Gloria was the eldest of four... View Obituary & Service Information

The family of Gloria Woods DiMantova created this Life Tributes page to make it easy to share your memories.

Send flowers to the DiMantova family.