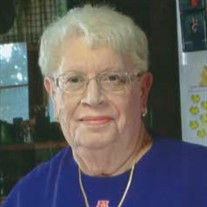 Ms. Esther R. Ebbess 90 passed away peacefully Tuesday, August 24, at Kline Hospice House, Mt. Airy MD. Born April 4, 1931. She was the daughter of the late Herbert P. and Mildred Irene Burns Simms. Esther proudly graduated from Lisbon High School, class of 1951. After graduation, Esther began her government career at the Naval Ordnance lab as an administrative assistant, where she met her late husband of 32 years James A. Ebbess, Esther later retired from the Social Security Administration in 1986. Esther loved all things Sports, especially Football “Go Ravens “! She enjoyed playing weekly bingo with her family and friends. Esther very much enjoyed cooking, conversation, and anything that was a goodtime; she most loved spending time with her family! She is survived by: Two granddaughter’s, Keristen N. Marshall of Emmitsburg and McKenzie Schrider of Taneytown. One grandson James S. Ebbess Jr. of Hedgesville W.V. and 5 Great Grandchildren, Willow A. Kint, Logen C. Marshall, Zella Schrider and Brighton & Jaxon Ebbess. Esther is preceded in death, by her late husband as well as brothers, Grayson, Elmer G., Gilbert L., Donald S., Larry E. Simms. As well as sisters, Fairey “Sue” Oland and Yvonne M. Thomas. She will be remembered by all, for her charisma, since of humor, kindness, and ability to always have a great time! The family will receive friends from 2 to 4 p.m. and 6 to 8 p.m. Tuesday August 31st, at Haight Funeral Home & Chapel, Sykesville, where the funeral services will be held at 11:00am Wednesday September 1st. Interment will be held at Mount Carmel Cemetery, Sunshine.

The family of Mrs. Esther Rosalie Ebbess created this Life Tributes page to make it easy to share your memories.

Send flowers to the Ebbess family.