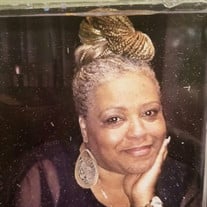 Erica Yvette Holland-Booze, 56, was born on March 16, 1965, to the late James Edward Holland Sr., and Sandra Mae Carroll Holland-Jones. She passed away on Friday, September 30, 2021, at 6:28 pm after a lengthy illness at the home of her mother surrounded by loving family and friends. Erica attended the Full Gospel Baptist Church, Cooksville, Maryland. Beginning at an early age she accepted the Lord Jesus Christ as her Savior. Erica dedicated her life as a helper in God’s vineyard. She served in the Usher Ministry starting at the age of nine. First as a Junior Usher, then Youth, Young Adult Usher, and finally a Senior Usher. She also was the leader of the Junior Ushers Ministry at the time of her passing. Erica was also a dedicated member of the Culinary Ministry. Erica’s formal education started at Lisbon Elementary School, Lisbon, Maryland and Bushy Park Middle School, Glenwood, Maryland. When her family relocated to Baltimore County, she attended and graduated from Milford Mill High School, in 1983. After graduating from high school, she attended Baltimore County Community College for several years. However, her life-long ambition was to become a Cosmetologist. She pursued that desire at Ron Thomas School of Beauty, becoming a Licensed Cosmetologist at the age of twenty-two. She spent many years perfecting her skills and building a very impressive list of clienteles who often praised her for her creativity. Erica had a life-long vision of owning her own Beauty Salon. This became a reality when she opened Textures & Tonz, in Baltimore County the spring of 2019. Erica was a true master of her craft and highly sought after. Erica married Michael Edwin Booze on August 24, 1996, and from that union came one daughter Laurel MeKenzie Booze, and a stepson Brian Reginald Booze. Michael and Erica were married for twenty-five years. Erica enjoyed many things however she had a God given talent and passion for Interior Decorating. She loved making floral arrangements, painting, and transforming a home into a picture book work of art. Because of her skills and attention to details, she was a sought-after decorator. Erica also loved to travel and shop. Her taste for the best attire showed in her style of dressing and the bling-bling accessories that she wore. She was truly a glamour girl! To know Erica was to love Erica! Her radiant smile could melt anyone’s heart. She was a kind, understanding and gentle person who always loved spending time with family and friends. She was always giving of herself and an inspiration to all who knew her. She had a sense of humor that was contagious making others keel over laughing. Erica also had a serious side. Sometimes she could be heard giving advice or lecturing the younger children in church in a loving, but firm way when needed and they listened. Erica would go out of her way to help others. She often visited nursing homes and assisted living homes to offer her hair services to those clients who no longer could come to her salon and never felt it was a burden. Erica let her love for the Lord shine in what she did and the way she treated others. She was truly a person of faith and lived life serving others. Erica leaves to mourn a loving family, husband Michael Booze, daughter Laurel M. Booze, stepson Brian R. Booze, grandson (her pride and joy) Rylan Myers, devoted mother Sandra M. Holland-Jones, brothers James E. Holland Jr. (wife Donna), Tony P. Holland (wife Linda), and a host of aunts, uncles, nephews, nieces, cousins, loving best friends, Diedre Savoy, Carla Jones, Karen Brown, Tanya Butler, Sherry Walker, her second Mom Ruth Olorunfemi and a multitude of friends and acquaintances. Lastly, she leaves to mourn her special cousin Annette Holland, who was faithfully by her side from the very beginning of her illness to the very end. Erica, you remain deeply loved, greatly missed, and never forgotten! Rest in peace precious one for this is not goodbye!

Erica Yvette Holland-Booze, 56, was born on March 16, 1965, to the late James Edward Holland Sr., and Sandra Mae Carroll Holland-Jones. She passed away on Friday, September 30, 2021, at 6:28 pm after a lengthy illness at the home of her mother... View Obituary & Service Information

The family of Erica Holland Booze created this Life Tributes page to make it easy to share your memories.

Send flowers to the Booze family.